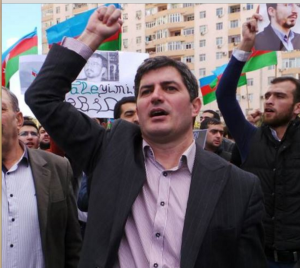 A court hearing was held for Karabakh war veteran and APFP Presidium member Asif Yusifli in Prison #6. According to Yusifli’s lawyer Fakhraddin Mehdiyev, the hearing was presided over by Nizami District Court judge Matanat Hajiyeva and the matter under consideration was changing Asif Yusifli’s sentence due to the amendment made to Article 178 (fraud) of the Criminal Code.

The lawyer said the charge against Asif Yusifli was reclassified from Article 178.3.2 to Article 178.2, but the 6-year prison sentence was upheld.

In the lawyer’s opinion, considering that the new wording of the Article stipulates a penalty of up to 5,000 AZN or imprisonment for a period of 3 to 7 years, the court could have reduced Yusifli’s sentence by taking his personality into consideration, but the judge did not take it into account.

The lawyer said the decision would be appealed in the coming days.

Background: Asif Yusifli was arrested in November 2014. Although the victim in the case had no complaints and had been compensated for the material damages over and above the actual loss, Asif Yusifli was convicted and sentenced to 7 years and 6 months in jail by Baku Grave Crimes Court on 30 July 2015. Baku Court of Appeal upheld the verdict on 9 October 2015. On 4 May 2016, Supreme Court reduced Yusifli’s sentence to 6 years.