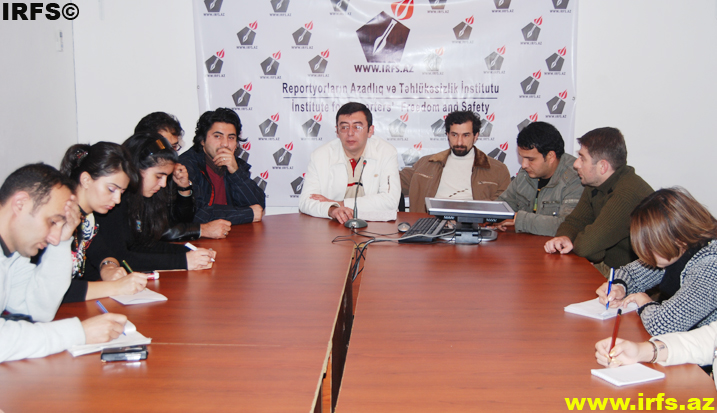 On 4 December, a group of creative youth conducted a press conference in the press center of the Institute for Reporters’ Freedom and Safety to announce a Public Support Committee for foreign radio stations in Azerbaijan that are in danger of being shut down.
Elnur Aslanbeyli opened the event and talked about the aim of creating the Public Support Committee. According to Aslanbeyli, the committee will carry out different actions, signature gathering and so on to protest against the discontinuing the broadcasting of "Radio Liberty", BBC and "Voice of America."

“’Radio Liberty’, BBC and ‘Voice of America’ radios are the only electronic mass media in the country,” said Aslanbeyli. “In a country, which considers itself democratic, the closure of these radios is unacceptable. The closure of these radios means isolating Azerbaijan from outside. As a group of young people, we are creating this public committee to express our objections this way. Representatives of certain parties and independent youth will join this committee,” saying this Aslanbeyli added that they will hold various actions in connection with this issue in three directions.

“We will appeal to society to move their clocks one hour back to Moscow time. Besides, we’ll hold an action under the slogan “Mercy upon Heydar Aliyev” to visit Fakhri Khiyaban and pray for his soul. We will hold an action to tell Jonathan Hennick “Go Away”, who was USA Embassy Public Relations Department Chief when “Azadlig” newspaper editor-in-chief Ganimat Zahid was arrested and who stood at the entrance of the Yasamal District Police Department, and to say “Support for Chingiz Mammadov” who is retired police colonel. We will ask the embassies of western countries to Azerbaijan to leave if they cannot protect these radios.”