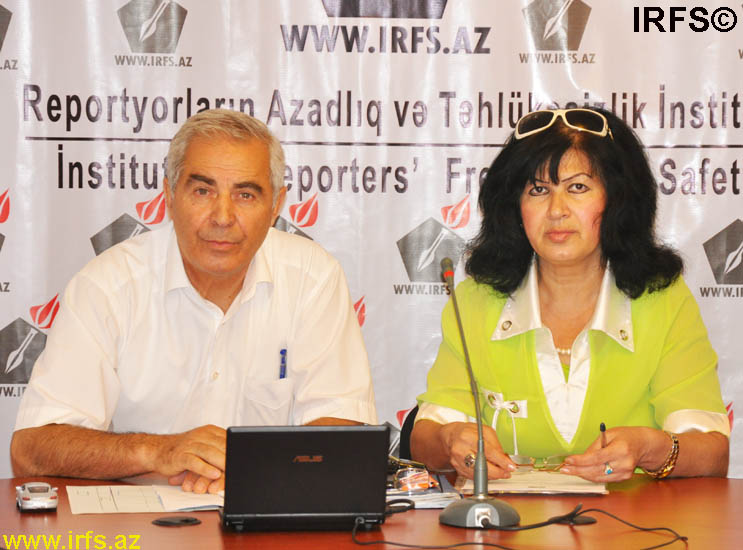 Today, June 30, in the press center of the Institute for Reporters’ Freedom and Safety, Davachi region resident Nazim Bayramov conducted a press conference in connection with his son’s arrest under pressure of Justice Deputy Minister Nazim Alakbarov.
According to authoritative representative of the injured party Ali Alakbarov, on 14 July 2008, in 86km of Baku-Guba road,  Justice Deputy Minister Nazim Alakbarov’s sister Naila Alakbarova’s “Honda CR-V” car with state plate number 10-UR-333 hit Vasig Bayramov’s “Vaz 2107” car which was going the opposite direction on his way, and as a result ended three people’s lives.
“During this accident, Deputy Minister’s father, who was going to Guba’s recreational place Gachrash, was also killed,” said A.Alakbarov. “Although the sides came to an agreement, V.Bayramov and N.Abdurrahmanov, the driver of “Vaz 201” car with state plate number 29-BA-294, whom N.Alakbarova wanted to pass, were arrested after Nazim Alakbarov’s interference. During a hearing held in the Grave Crimes Court under the chairmanship of Judge Anvar Seyidov V.Bayramov was sentenced to 8 years and N.Abdurrahmanov to 9 years.
Appeals have been made to government organs, to the president, to the first lady M.Aliyeva many times asking for fair trial. However, no result has ever been achieved.

Lawyer A.Alakbarov emphasized that the injured party went to Naila Alakbarova’s house, but the woman refused to listen to them.