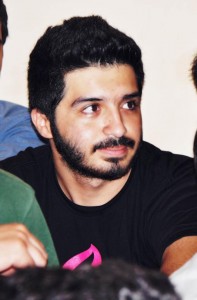 Trial of online activist Omar Mammadov continued on July 1 in the Baku Serious Crimes Court. The hearing was presided over by judge Eldar Mikayilov. Mammadov’s lawyer Alayif Hasanov addressed the court with a closing speech in which he called the case politicized and urged for his client’s acquittal  citing no evidence of guilt.

Note that on June 18 the prosecutor pushed for a 6-year prison sentence for Mammadov.

Hasanov underlined that Mammadov was retaliated for administering Facebook pages “Exclusives From AzTV” and “The Page Named After Haydar Aliyev” which shared critical and satirical posts.

He further pointed to numerous procedural violations in handling of the case.

“The detention protocol did not specify the term for which Mammadov was going to be detained. After detention he was denied access to the lawyer he trusted.  Investigators allege that they arrested Mammadov based on a report that he was engaged in drug trafficking. How could it be possible when Mammadov was studying in Cyprus?” asked Hasanov.

The decision on conduction of drug test was implemented without its copy presented to the defense and no opportunity was provided for an alternative examination. The results of the drug test revealed Mammadov was not a drug user, but on the other hand, advised to register him.

The lawyer requested the court to take all these into account and acquit Mammadov of charges.

The judge set the next hearing for 4 July, when Mammadov is expected to make closing arguments.

Omar Mammadov is a member of Civil Solidarity party and Head of the “Akhin” (Flow) youth movement. After his arrest he re-joined NIDA movement. Mammadov was active social networker. Notably he was one of the admins of the Facebook Page “Exclusives from AzTV” which shared posts ridiculing and criticizing the faults of some government officials. In January of 2014 he was arrested on charge of drug possession.