Digital media training courses held in the regions of Azerbaijan 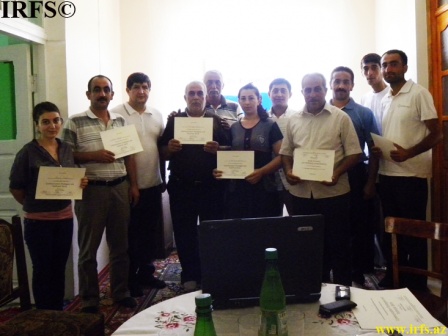 Today the Institute for Reporters’ Freedom and Safety (IRFS) reported on the achievement and results of the  “New media and regional outreach” project supported by the European Union. . With a total of 117,876 EUR support from the European Union, IRFS continues to promote civil journalism throughout the country.
According to IRFS Chairman the main objective of the project is to give support to multimedia activists and citizens.

The project is being implemented by the NGO consortium led by IRFS in Baku and four regions including Ganja, Nakhchivan, Lankaran and Guba. The NGO consortium consists of 3 NGOs: Democratic Journalism School, IRFS and Regional Human Rights and Media Center. In the past six months, IRFS and partners have organized a training course in each target region.  The next round of training is planned for upcoming period.  The most active participants from the previous trainings will have an opportunity to act as trainers themselves.

One of the trainers, journalist Shahvalad Chobanoglu, says the trainings have so far been very successful. He says there is a great interest in digital media in Ganja and Guba. According to him, training participants were mainly local journalists, human rights activists, active internet users and representatives from NGOs and youth organizations.  “We train them on how to use open-source and licensed programs, to upload filmed videos on the Internet, to create and use blogs and to use social media to find people who share the same opinion as us” said Chobanoglu.

Unfortunately, Azerbaijani NGOs do not get maximum benefit out of internet and other ICT. Partners in the project, Rovshan Hajibayli and Khalid Kazimov underlined that the internet is insufficiently used in the regions and practical measures should be taken to tackle this problem.

Emin Huseynov condemned some pro-governmental mass media outlets, which claimed at the beginning of the project that it is aimed at breaking stability in the regions. It goes without saying that the action has significantly contributed to promotion of digital media and ICT even in the remote communities of Azerbaijan. This at the end of the day will result in better dialogue and public debate which are necessary attributes of democratic society.

DIGITAL MEDIA TRAINING COURSES HELD IN THE REGIONS OF AZERBAIJAN