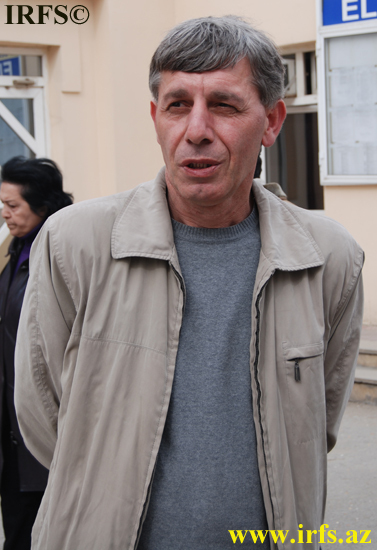 Today, 8 April, in the Baku Appellate Court, under the chairmanship of Judge Abid Abdinbeyov, a preliminary hearing was held on the defendant’s appeal against the Yasamal District Court’s decision regarding Internal Affairs Minister Ramil Usubov’s lawsuit against “Femida 007” Newspaper’s Editor-in-chief Eyyub Karimov.
E.Karimov participated on behalf of the plaintiff, Ministry of Internal Affairs Representative Dabuleyka Guliyev and lawyer Alirza Habliov took part in the hearing.
E.Karimov filed two motions during the hearing. In his first motion Karimov asked the judge to annul the decision of the Yasamal District Court and to send the case to the Yasamal District Court to be reconsidered. In his second motion he asked for the court investigation provided that the case will be reconsidered.
Both representatives from the Ministry of Internal Affairs said that these motions were unfounded and asked the judge to not fulfill them.
The judge board came back from deliberation, and said that the motions were not fulfilled and scheduled the next hearing for 22 April, 11.00 a.m.
Interior Minister Ramil Usubov filed a lawsuit against Eyyub Karimov under article 147.2 of the Criminal Code due to articles “Letter fancier,” and “NSM and Chief Prosecutor’s Office know well who ordered it,” which were published in Femida-007 newspaper; and “Internal Ministry inside and outside of the game” published in Azadlig newspaper. On the basis of this lawsuit the Yasamal District Court sentenced Eyyub Karimov to 1.5 years corrective labor and he has to pay 15% of his salary to the government.