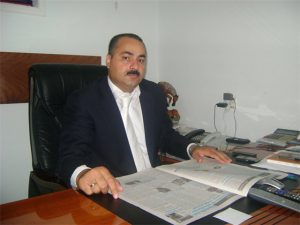 Gundalik Baku newspaper editor Habil Valiyev has been attacked in Baku; journalist claims he is targeted because of his professional activity. On March 14 driver of a Mercedes Benz, Baku resident Emil Zeynalov, and a man in his car committed hooliganism against Gundalik Baki newspaper editor Habil Valiyev, beating him in the face with the handle of knife. Ministry of Interior reported about it on its website.

In his comment to the Institute for Reporters’ Freedom and Safety (IRFS) Habil Valiyev said he was attacked by a criminal group for his professional activity.

“On 14 March, 12:40am, I received a call from unknown people, who asked me to meet them near our house. There were ten of them. They had pistols and knives. They attacked me as they knew I was editor of Gundalik Baki. They beat me in my ear and temple with the handle of knife. I reported the attack to Interior Ministry hotline (102) and officers from Yasamal District Police Station #27 came to the place of incident. I was taken to the hospital and the police started investigation based on my statement” said Valiyev.

Valiyev is worried over potential attacks on his family members or other employees of the newspaper.

The journalist believes he was attacked due to a series of articles published in Gundalik Baki, exposing human trafficking, and prevailing crime situation in the country.

Valiyev added that he had appealed to the President, Minister of Interior and Minister of National Security trying to raise awareness on the above-mentioned crimes.