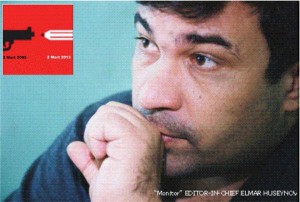 On March 02, journalists in Azerbaijan and around the world will mark the eighth anniversary of the unsolved murder of Monitor editor-in-chief Elmar Huseynov, who was fatally gunned down in his apartment building in a well-organized attack.  On this occasion the Institute for Reporters’ Freedom and Safety (IRFS) calls for the authorities to bring the perpetrators and masterminds of Elmar Huseynov’s murder to justice, and to take immediate action to improve freedom of expression in Azerbaijan.

With Elmar’s death, the Azerbaijani people lost a voice that courageously sought to report the truth. His case has become deeply symbolic, reminding the Azerbaijani media community of the courage needed to pursue investigative journalism and of the inherent risks associated with this work.

When Huseynov was killed, President Aliyev immediately condemned the crime, calling it a barbaric act aimed at destabilizing the country ahead of parliamentary elections scheduled that fall (2005). He pledged the murder would be solved within 40 days and invited the U.S. Federal Bureau of Investigation and Turkish agents to join the probe. However a few months later, Azerbaijan refused from the assistance by Turkish and US law-enforcement agencies, assigning the duty of continuing the investigation to the Ministry of National Security. Eight years on, the Azerbaijani authorities have failed to adequately investigate Elmar’s murder and do not demonstrate will to solve this case.

Today Elmar Huseynov has become one of the main symbols of freedom of speech and expression in Azerbaijan. While those behind Elmar’s brutal killing remain free all journalists are forced to work in the shadow of fear. Elmar’s case has come to epitomize the impunity with which authoritarian regime conspires to silence journalists.

On the eighth anniversary of Huseynov’s murder, IRFS once again calls: