EMIN HUSEYNOV APPEALS TO COURT ABOUT HIS BEATING 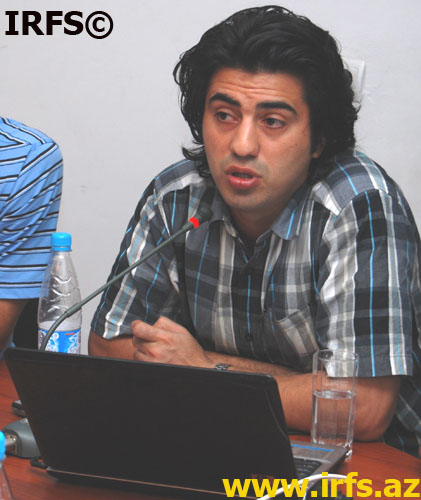 The lawsuit was prepared by Rashid Hajili from Media Rights Institute, Khalid Agaliyev and Elchin Sadigov was submitted to the Nasimi District Court.

It is written in the lawsuit that on 14 June Huseynov was subjected to police pressure when an event organized in “Alaturka” Restaurant to mark the 80 birthday of Cuban revolutionist Che Guvera was dispersed. Police treated Huseynov, who wanted to cover the event, unfairly. He faced pressure in the restaurant and then in Police Department #22, where he was taken. As a result, Huseynov, who lost consciousness, was hospitalized for more than 20 days, and he is still continuing outpatient treatment.

It is noted in the lawsuit that although a month has passed since E. Huseynov was struck by employees of Police Department #22, no legal steps have been taken to investigate this incident, no charges have been brought against those who beat E. Huseynov, nothing was disclosed on the investigation of the case, and the IRFS chairman hasn’t been informed about the results of a forensic examination.

Articles 49 (freedom of assembly), 47 (thought and speech freedom), 46 (defense of honor and dignity), 28 (right to freedom) of Azerbaijan’s Constitution, as well as the thesis of article 71 (security of human and citizen rights and freedom),  articles 7 and 9 of Law on “Freedom of Assembly”, article 3 (prohibition of torture), 5 (Freedom and inviolability), 10 (expression freedom) and 11 (freedom of assembly and unity) of European Convention on Human Rights were violated with regards to Emin Huseynov.

Huseynov asks the court to issue a decision in which the action of dispersing the peaceful event at “Alaturka” Restaurant, the action of beating him and then taking him forcefully to the police unit are considered against the law. He is also seeking each of defendants to pay 50,000 (fifty thousand –total 150, 000 AZN) AZN for moral damages and suffering.