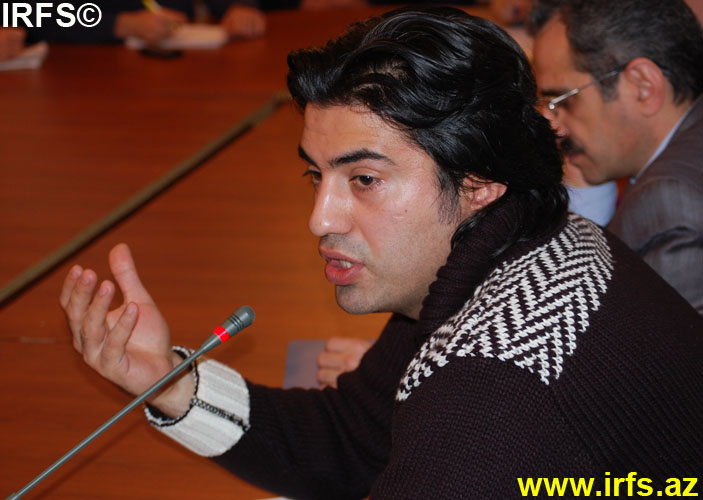 Today, 22 December, in the Baku Appellate Court, under the chairmanship of Judge Madina Bagirova, a court hearing was held on the lawsuit of the Institute for Reporters' Freedom and Safety Chairman Emin Huseynov against Internal Ministry, Nasimi District Police Department and Police Unit 22 of this Department. E.Huseynov’s defense lawyer Elchin Sadigov and Internal Ministry representative Farhad Azimov from defendant side participated in the hearing.
Farhad Azimov stated that during an event conducted in "Alaturka" restaurant to celebrate Cuban sociologist revolutionist Ernesto Che Guevera’s 80 year birthday people in the neighborhood were troubled because of the loud noise and complained to police. On the basis of the complaint, police came to the”Alaturka” restaurant where the incident took place. According to Azimov, police employees did not pressure the event participants including Emin Huseynov, they simply checked whether they had their passports with them or not, and then released them.
However, Judge Madina Bagirova issued a decision to adopt the case for consideration and to send it to the Nasimi District Court to be considered.

On 17 November a court hearing on the lawsuit of the Institute for Reporters' Freedom and Safety Chairman Emin Huseynov against a Baku Appellate Court decision was held in the Azerbaijan Republic Supreme Court Colleague on Civil Cases under the chairmanship of judge Alasgar Aliyev. The court fulfilled E. Huseynov's appeal partially, annulling the Appellate Court’s decision and issued a decision to send the case back to the Appellate Court for reconsideration.

On 14 June a group of fans of Cuban sociologist revolutionist Ernesto Che Guevera was trying to conduct an event in "Alaturka" restaurant when the employees of law enforcement organs prevented it. IRFS Chairman Emin Huseynov, who was there to film the event, was beaten by police in the Police Department 22 and was subjected to moral pressure. Emin Huseynov, who lost his consciousness due to police pressure, received treatment for more than twenty days and is still continuing his treatments.