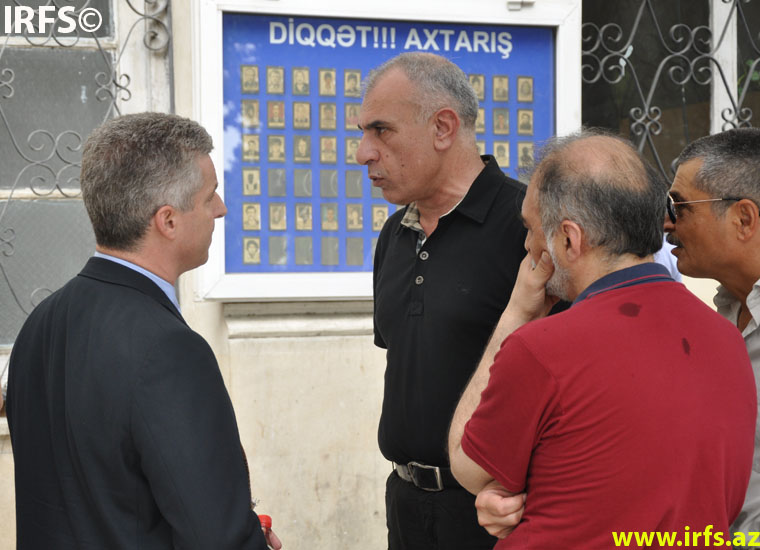 Today, 10 July, Sabail District Court Judge Rauf Ahmadov issued a decision to sentence “Alumni Network” Youth Organization Coordinator, ANTV Online TV Leader Emin Milli and one of “OL” Youth Organization’s coordinators, well-known video-blogger Adnan Hajizade to two months pre-trial detention and to institute a criminal case against them under article 221.1 (hooliganism) of the Criminal Code of Azerbaijan Republic. Alleged attackers Babek Huseynov and Vusal Mammadov have been accepted as injured party; however they did not participate in the hearing.
Although Emin Milli and Adnan Hajizade were brought to the court handcuffed at 6:00 p.m., the decision was adopted at 10:00 p.m. Only Emin Milli’s lawyer Elton Guliyev and Adnan Hajizade’s lawyer Isakhan Ashurov were allowed in the hearing which was held closed. Journalists, human rights defenders and relatives of Emin and Adnan had to wait in front of closed court building, and no information was given until the hearing was over. The journalists, who wanted to cover the incident, were physically pressured by civil clothed police.
On 8 July, at approximately 8:00 p.m., Emin Milli and Adnan Hajizade were sitting at a table in a restaurant when two people that looked like sportsmen came up to them, attacked them causing physical injuries. Although they appealed to police as victims, police detained Adnan and Emin, issued a decision to detain them for 48 hours as suspected persons and freed the attackers.
Previous Post

PROVOCATION BEING PREPARED AGAINST JOURNALIST IN NAKHCHIVAN