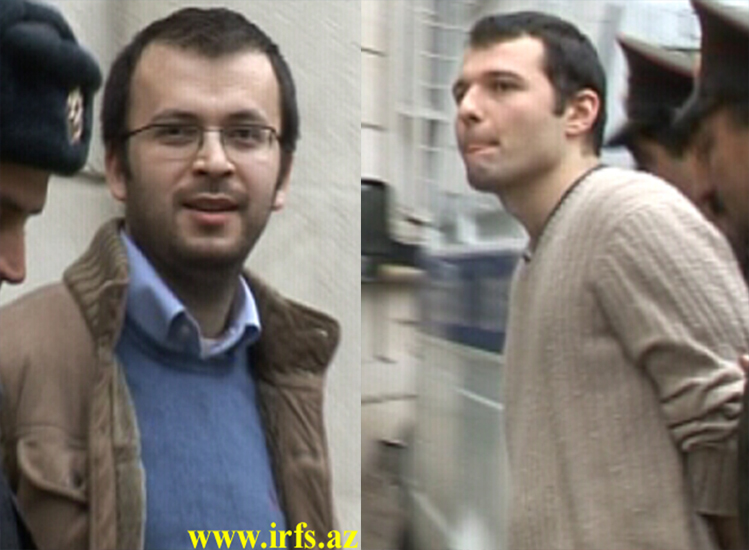 Today, 11 November, in the Sabail District Court, under the chairmanship of Judge Araz Huseynov, during the hearing held on the criminal case opened under article 221.2.1(hooliganism) and 127 (inflicting intentional minor bodily harm) against young bloggers Emin Abdullayev (Millli) and Adnan Hajizade a verdict was issued. According to the verdict, Emin Milli was sentenced to 2,5 years imprisonment and Adnan Hajizade to 2 years imprisonment.
During the hearing, the state plaintiff spoke first and asked the court to issue a verdict to sentence Emin Milli to 3, 5 years imprisonment and Adnan Hajizade to 3 years imprisonment.
Bloggers’ lawyers Isakhan Ashurov and Elton Guliyev stated that they are confident that the court will adopt a politically motivated decision. Both of the lawyers stated that the bloggers are innocent and asked the court to release them.
Adnan Hajizade said, “It was international youth day yesterday. The verdict issued against us is a present from Azerbaijan’s government to young people and an indication of its attitude towards the youth.”
Emin Milli said that this verdict did not mean anything to him, because he knew that it would be politically motivated. “The major issue is to live an honest life,” emphasized Milli.
Injured party Vusal Hasanov stated that he regretted the imprisonment of the bloggers, but stressed that they received fair punishment.
Isakhan Ashurov and Elton Guliyev said that they will file an appeal against the verdict.
On 8 July, at approximately 8:00 p.m., Emin Milli and Adnan Hajizade were sitting at a table in “Lebonese” (Livan) restaurant along with several other young adults, when two people that looked like sportsmen came up to them, and attacked them causing physical injuries. Although they appealed to police as victims, police detained Adnan and Emin as suspected persons for 48 hours and freed the attackers. On 10 July, the Sabail District Court issued a decision under article 221.2.1 (hooliganism) of the Criminal Code to sentence Emin Milli and Adnan Hajizade to two months pre-trial detention. On July 20 the Appellate Court upheld the decision of the lower court. The investigation of the criminal case was concluded and a criminal case under articles 221.2.1 (hooliganism) and 127 (inflicting intentional minor bodily harm) was opened against E.Millli and A.Hajizade and the case had been sent to court to be considered.