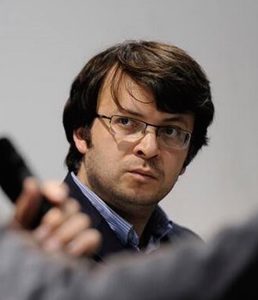 Lawyer Adil Ismayilov was not satisfied with Baku City Main Police Department’s response to the court’s inquiry and filed a verbal motion with the court to request the book with the case files registry. The motion was granted;
Lawyer Adil Ismayilov filed another verbal motion to replace the restrictive measure of pretrial detention selected against his client Nazim Agabayov with the restrictive measure of house arrest. This motion was dismissed.

The presiding judge announced the response to the court’s inquiry requesting review of the registry book submitted to Baku City Main Police Department on March 4, 2016 based on the motion of lawyer Adil Ismayilov. The response of the Police Department was that the records of criminal case materials were maintained electronically, and therefore it was impossible to submit them in hard copy.

Disappointed defense lawyer Adil Ismayilov questioned this response asking: “Do they mean that the log of protocols on investigative activities is presented electronically? It cannot be like that.”

The judge replied that it was stated in the response. Lawyer Adil Ismayilov objected saying : “But it is impossible. So what they have written like this?! I requested the register book. This is not a response to my inquiry. It turns out that they have not responded to the inquiry.”

The public prosecutor Farid Nagiyev having reviewed the response said “No problem. If needed, another request can be made to Baku City Main Police Department.”

The presiding judge said the court would submit another request.

Nazim Agabayov said he concurred with his lawyer’s motion.

Commenting on the motion, the public prosecutor said there was no change in the circumstances and asked for rejection of the motion.

The presiding judge dismissed the motion.