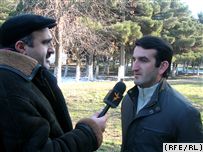 “Radio Liberty” correspondent Babek Bakir has not been allowed in station #34 of Jabrayil-Gubadli election circle #120 to monitor referendum today(18 March), according to “Radio Liberty.”
The Institute for Reporters' Freedom and Safety contacted the chairman of the station #34 of Jabrayil-Gubadli election circle #120 Gambar Ahmadov. G. Ahmadov said that Bakir was not permitted in the election station, because he was not registered. “All monitors have filled out a questionnaire and have been registered,” Ahmadov told IRFS. “However, ’Radio Liberty’ correspondent Babek Bakir was not registered and therefore, was not allowed in the station.”
IRFS was told by the hotline of the Central Election Commission that the journalist should have gone through registration like other observers.
Another employee of “Radio Liberty” has also been subjected to pressure today. According to “Radio Liberty,” in polling stations # 16 and 17 of Election Constituency #20 in the Narimanov District, students were brought by a bus and voted. In response to a question from a “Radio Liberty” correspondent, the youth said that they were using the bus because they were going on a trip.  One of the students attempted to take the “Radio Liberty” correspondent’s camera from him.
IRFS could not get detailed information about either of the incidents from “Radio Liberty. ”
Previous Post