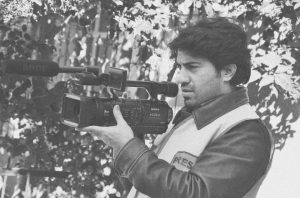 The European Court of Human Rights has started communication on the case of Emin Huseynov, Chairman of the Institute for Reporters’ Freedom and Safety, against the violation of his rights to freedoms of assembly and expression and the right not to be tortured. The Court has sent already several questions to the Azerbaijani government relating to the case.

Background: Independent journalist and the chairman of the Institute for Reporters’ Freedom and Safety, Emin Huseynov together with a group called “Che Guevara Fan Club” held a gathering at a private café in Baku to celebrate the eightieth anniversary of the birth of Che Guevara on 14 June 2008. Approximately 30 minutes after its beginning, about 30 police officers entered the café. They suspended the gathering and decided to take the participants to a police station. The police detained Huseynov and his two colleagues from IRFS.

Huseynov was taken to a police car by four police officers, who used force against him. In particular, they punched and kicked him in the stomach. After his arrival at the police station, he was separated from other arrested persons and was taken to the room of the Deputy Head of the Police Station, where he was threatened and beaten. One of the police officers hit himin the neck with his elbow; as a result, Huseynov lost consciousness. Taken to the hospital in an ambulance called by his colleagues, Huseynov was admitted with the diagnosis of cranial trauma and neurological reaction.