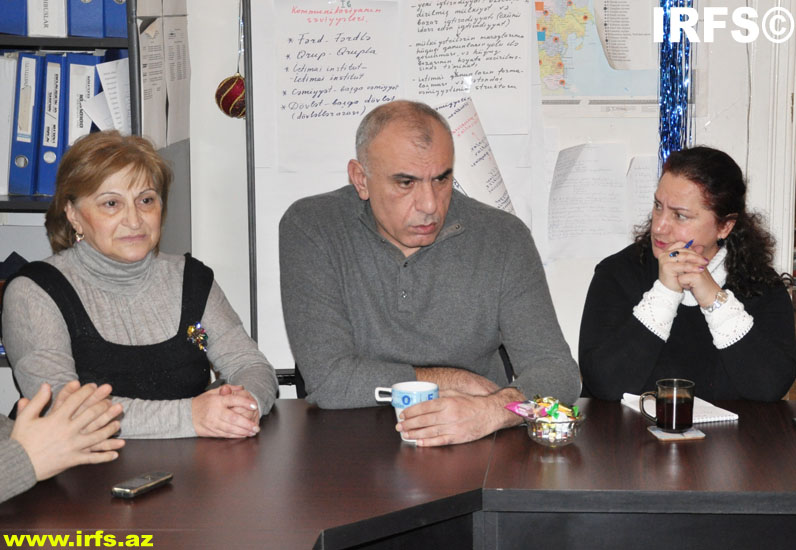 Today, 31 December, a meeting was held regarding provocation against imprisoned Editor-in-chief of Gundelik Azerbaijan and Realniy Azerbaijan Newspapers Eynulla Fatullayev and the new criminal case launched against him.
Fatullayev’s defense lawyer Isakhan Ashurov said that they searched only the spots (his shoe and jacket) where they found the narcotics on Eynulla Fatullayev. “Even if they had exact information where the drug was, the people who conducted the search should have searched Fatullayev completely,” said Ashurov. “Conducting the search in his shoe and sleeve only and finding narcotics there indicates that there are dark nuances here.”

Fatullayev objected to the search and said that the drugs were implanted on him beforehand, and he refused to sign the protocol regarding the search. Ashurov added that Fatullayev’s clothes were changed after the search and he was given black clothes from soviet era. Then he was held in a cold room that had no bedding or windows for a day. The lawyer assessed this pure ill-treatment.

Then Fatullayev’s father Emin Fatullayev spoke and appealed to Internal Affairs Minister Ramil Usubov via press and said that he wanted to meet with him to discuss several details related to this issue. Father Fatullayev emphasized that this was an operation organized by higher circles against Eynulla Fatullayev to issue additional sentence against his son.

The representatives of civil society and media discussed the statements and steps in connection with this issue. During the discussions several suggestions were made.

* To immediately demand for release of imprisoned journalists and bloggers
* To put the responsibility of “Monitor” journal editor-in-chief Elmar Huseynov’s murder on the administration’s shoulders
* To conduct protest actions
* To make calls on world leaders to cancel meetings with President Ilham Aliyev and officials that are known for their repressive actions
* To declare 2010 the year of international solidarity with Azerbaijan’s democratic forces and international community and so on.

The next meeting will be held on 4 January at noon.