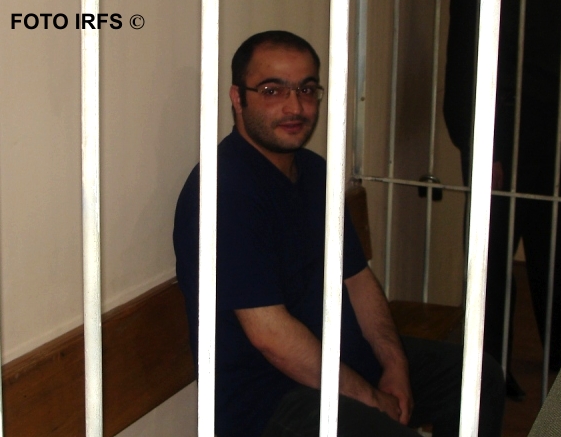 As of today, imprisoned “Realny Azerbayjan” and “Gundalik Azerbayjan” newspapers’ Editor-in-Chief Eynulla Fatullayev has started a hunger-strike in Prison #12.
Fatullayev’s father Emin Fatullayev told this to the Institute for Reporters’ Freedom and Safety.
According to Emin Fatullayev, yesterday he visited his son in prison, and his son told him about his intentions to start the hunger-strike. “Eynulla told me that today (March 26) he would appeal to the prison’s leadership in the written form, informing them about the hunger-strike. He demands that all journalists and political prisoners be released, and that the Council of Europe and OSCE present a mechanism to Azerbaijan’s society for resolution of the political prisoners and prisoners of conscience problem.”
IRFS also spoke to Eynulla Fatullayev’s lawyer Isakhan Ashurov. Ashurov confirmed the hunger-strike, and said that tomorrow he will visit the imprisoned journalist.
Mehman Sadigov, chief the Public Relations Department of the Justice Ministry’s Penitentiary Service, told IRFS that as today is an official holiday in Azerbaijan he is unable to get in touch with the leadership of Prison #12 and has no exact information about Eynulla Fatullayev’s hunger-strike.
Previous Post