Final dispatch from the trial of human rights defenders Leyla and Arif Yunus, sentenced to 8.5 and seven years in jail 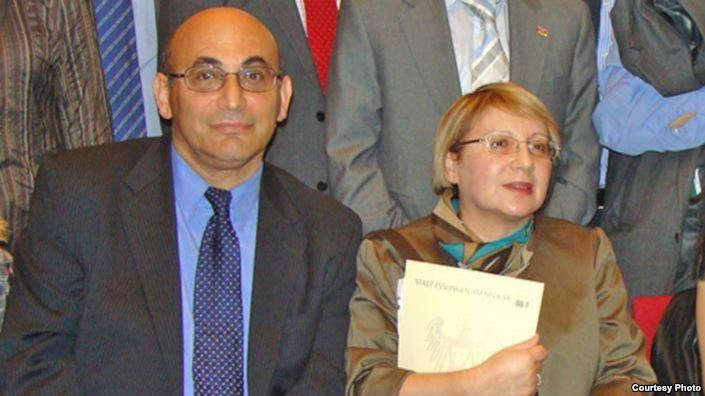 On 13 August, the Baku Court of Grave Crimes heard the criminal case against the human rights defenders Leyla and Arif Yunus. Judge Afgan Hajiyev presided over the hearing. Except for a few embassy representatives, none of the independent journalists and members of the public were allowed to enter the court building. Arif Yunus’ health once again worsened during the hearing and an ambulance was called, which caused a break in the hearing.

Defence speeches at the hearing

Lawyer Afgan Mammadov requested acquittal for his client, Arif Yunus. “We have presented sufficient evidence to the court regarding the case, which proves that there is no element of a crime in Arif Yunus’ actions. Whereas, neither the investigative agency, nor the court possesses any reliable evidence regarding the charges brought against Arif Yunus. The witnesses have stated that they have no claims against Arif Yunus. There is no object of a crime in this case at all, and it is unknown who has suffered damage. Even Rana Safaraliyeva, who is recognized as the victim in the case, has no complaints against Arif Yunus. She has said that she does not know him”, the lawyer said.

Leyla Yunus’ lawyer Elchin Gambarov also requested his client’s acquittal, as, according to him, the charges were not proven and Leyla Yunus protected the rights of many people. Lawyer Ramiz Mammadov argued that the charges of fraud, tax evasion and abuse of official powers filed against Leyla Yunus had not been proven in the course of the trial.

Final speeches of the accused

Leyla Yunus thanked her lawyers. “Defending the rights of political prisoners requires great courage. Khalid Bagirov was Arif’s lawyer. He was removed from the Bar Association. Alayif Hasanov was my lawyer. The court satisfied a lawsuit filed against him by a recidivist sharing a cell with me, who sued him for talking to the press about my beating by that cell-mate and by Major Yagubov, and my being escorted only by male guards. Alaif Hasanov was disbarred. My other lawyer, Javad Javadov was interrogated in order to disqualify him from my defence. But his interrogation is not mentioned in the case materials. Fariz Namazli is a young lawyer. I understand that he also faces pressure. I refused his services so that the Bar Association would not remove him. Therefore, I say that my lawyers have shown great courage.

In the 19th century, Derzhavin wrote that a biased court is more dangerous than bandits. What is happening here now is more shocking than what happened in the 19th century. Today Azerbaijan follows the path of the former USSR, the red fascism. Today the people fighting dictatorship face repression. In former USSR, there was Article 57 in the Criminal Code, and all political prisoners were charged under this article. Now there is no Article 57 in Azerbaijan or Uzbekistan, but they resort to all articles in Criminal Code to prosecute political prisoners and prisoners of conscience. The length of the sentence requested by the prosecutor did not surprise me, because I knew the USSR experience very well and I have been witnessing the repressions in Azerbaijan for 20 years”, Leyla Yunus said.

Leyla Yunus also commented on the prosecutor: “The lawyers correctly noted that there is no element of a crime in our actions. The prosecutor repeated the indictment in his speech, but made a couple of mistakes. In fact more mistakes, but I will cite a couple of them. The bank employees said we have not done anything illegal and used our own account. The prosecutor says that Arif transferred money from his account to Leyla’s account, and the government media writes that the money was transferred to a different account. I had a common account with Arif, that is to say, Arif had transferred the money from his account to his own account. The prosecutor’s office could not understand it in order to investigate it, because in a foreign country several members of a family may have a single account. There is no evidence regarding the other charges as well. I declare that this trial is worse than banditry. But at least, those witness testimonies will be reflected in the minutes. We have not used the grant funds to grow and sell vegetables to make income. We held workshops and conferences within those projects.

The government talks about Karabakh every day. Why then are we outdone by Armenians in terms of propaganda about Karabakh? Arif is one of those persons, who destroyed Armenians’ position at international conferences. His books can be found in all libraries of the world, in London, in the U.S. Congress. Today we prosecute the persons who defeat Armenians in propaganda. But in Armenia, it does not even occur to them to arrest the persons struggling against Azerbaijan. This government destroys the people fighting against aggressors. This government is afraid of words. This trial showed that you all are afraid of words. Therefore you hold a closed hearing and do not allow the journalists and independent persons to attend the hearing to hear the truth. What happened here showed that we have been arrested for our struggle for independent Azerbaijan. In the 5th century AD, Augustine wrote that an unfair state is a gang of bandits. Today Azerbaijan is the successor of fascism and a gang of bandits”, Leyla Yunus said.

The judge interrupted her, saying “We have not come here to hear your lecture”.

Leyla Yunus: “The most difficult thing is that the decision that you’ll pass on us today will be a death sentence for us, because neither mine nor Arif’s health will allow us to remain in prison for a long time. But it is a historical trial, like Sakharov’s trial. Today, repressions continue against Khadija Ismayil, Intigam Aliyev and Anar Mammadli. In 1937, they wrote in prison, ‘Today we are sand and dead. But you are afraid of us even when we are dead’”.

The judge: “Are you done, Leyla Yunusova?”

Leyla Yunus: “Yes, Executioner, I am done, you can do your job. These words of Babek are a motto for us”.

He first thanked Leyla Yunus. “A man is born only once. It is important that you and the person you live with are like-minded. I am happy to be the spouse of Leyla Yunus. We are no longer young. I marked my 60th birthday in MNS [the detention facility of Ministry of National Security] in January. I wonder if there is a person who has ever marked his 60th birthday in a solitary confinement cell in MNS. For 37 of these 60 years, I have been together with Leyla. This is a mystical figure for Azerbaijan. Our trial resembles those of 1937, and is held in a similar style. Babek said that it is better to live one day as a free man than 40 years like a slave. We are historians and these words of Babek are a slogan for us.

In the Soviet period, when people cast away their party cards, we were fighting for the independence of Azerbaijan. After Azerbaijan became independent, we started the second stage of our struggle, a struggle for democratisation of the country. This was a difficult path, and we were subject to attacks. In 1988, when we revealed the truth about Azerbaijan, they labelled us as extremists and summoned us to the prosecutor’s office. The same scenario was repeated with regard to the truth about Khojali. We were walking this path together. If I returned to my youth and were to choose my spouse again, I’d once again choose Leyla”, Arif Yunus said.

Arif Yunus also spoke about his daughter: “We have a wonderful daughter. Our parents were Azerbaijani speakers. They sent to us to a Russian-language school so that we could build a career. But we educated our daughter in the Azerbaijani language. When they saw that the pressure against us was futile, they targeted our daughter. Thank God, there are still some honest people in law-enforcement agencies. They informed us and we sent our daughter abroad. She now lives in the Netherlands. She wanted very much that we stay with her, but we didn’t. We chose to fight for democracy and die here. We have also been sued earlier. In 2011, [Minister of Internal Affairs] Ramil Usubov sued Leyla. We had to live in Germany for a while due to pressures, and then returned”.

The historian complained of his health: “Until October, I couldn’t sleep at all. Since October, I do not sleep a single day without taking sleeping pills. I did not understand 90 percent of what happened during this hearing, because before being brought here every time, I am given two injections. I do not know where the doctor that you called on the first day came from, but he was anything but a doctor. He gave the injection in such a way that my hand was swollen for two days. I want to thank the doctor that was in MNS. I respect the people, who are professional and humanistic.

The lawyers’ job is even more difficult than that of doctors. If they want to arrest us, they will, there are so many articles. They give me Azerbaycan, Yeni Azerbaycan and Khalg newspapers every day. The same pictures, the same articles, but with different signatures”.

When Arif Yunus wanted to thank the embassies, the judge interrupted him. “You even don’t allow me to express gratitude,” said Yunus and then turned to the public prosecutor saying, “You read the trumped-up indictment twice. If Azerbaijan were a democratic country, the Azerbaycan and the Yeni Azerbaycan newspapers would sue you, because you read what you have copied from them”.

“When we said there is no democracy in Azerbaijan, they would tell us, how come then you are free? I thank the government for taking away this argument from them”, said Arif Yunus in conclusion of his speech.

The court sentenced Leyla Yunus to 8.5 years and Arif Yunus to seven years in prison. The verdict also ordered that their property be confiscated and the funds in their bank accounts be transferred to the state.

Note that the public prosecutor Farid Nagiyev had requested an 11-year jail sentence for Leyla Yunus and a nine-year sentence for Arif Yunus. He also requested that their bank accounts be frozen to ensure payment of the damage caused to the state with the funds in those accounts.