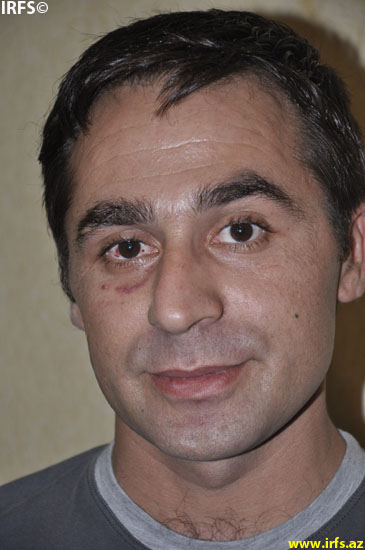 Rashad Ergun told the Institute for Reporters’ Freedom and Safety that Baku football team member Mahmud Gurbanov became angry after “The person who changed his reputation with money” article was published in the newspaper on 15 August 2010.

“Mahmud Gurbanov came to the editorial office and insulted everyone using abusive language. Then he came to my room and beat me. Newspaper employees Natig Mukhtarli and Kanan Mastaliyev wanted to interfere, but he began to break computers and other household items,” said Rashad Ergun and emphasized that the article in question contained no insult.

Ergun added that they appealed to the Nasimi District Police Unit #20 regarding the incident.

“I had a medical examination for my injuries. I heard Mahmud Gurbanov gave a statement today,” said the editor-in-chief, who added that he will appeal to court soon.

“I did not have an intention to have a fight when I went to the editorial office. They used insulting words and made me angry. Then Rashad and I had an argument. However, I have always respected journalists,” said Gurbanov.

IRFS was told by the Nasimi District Police Unit #20 duty service that they would not give any information because the investigator on this case was not in the unit.

“Komanda” sports newspaper has been operating since 2008.