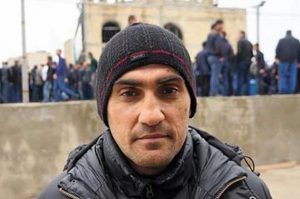 Former ‘hijab prisoner’ Dadash Valiyev has been abducted by the police, his family reported on 8 February.

According to them, the neighbourhood police officer of Zigh settlement of Surakhani district called Dadash Valiyev saying he had a letter at the post office. Then, the same precinct police came to Binagadi district where Valiyev lives, forced Valiyev into a NIVA brand vehicle and drove to an unknown destination.

It is supposed that Dadash Valiyev was arrested because of an IDP’s video message to Ilham Aliyev posted on Valiyev’s Facebook page on 7 February, at 2.30pm.

Dadash Valiyev has served a 2-year jail sentence for participation in the ‘Freedom for Hijab’ protest rally held in front of the building of the Ministry of Education on 5 October 2012.