Former Minister Ali Insanov Believes Charges against Him Are a Scheme 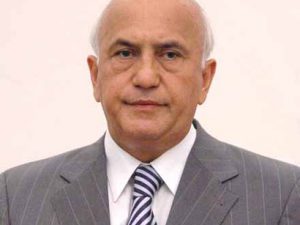 According to lawyer Togrul Babayev, he has met with former health minister Ali Insanov who has recently faced new criminal charges and has been transferred from Prison #13 to Baku Detention Facility #1.

Babayev said as Ali Insanov was still serving a jail sentence expiring on October 20, he was not additionally ordered to be detained pending trial, but was simply transferred from the prison to the detention facility.

“Ali Insanov rejects all charges. He believes that it is all just a pre-arranged scenario to keep him in prison. There were 57 days left until his release. It is beyond any logic to think that a person who has served 11 years in jail would attack a Penitentiary Service employee just to tear some act 57 days prior to his release. If the act is torn, replace it with a new one. It is improbable that he attacked and pushed the employee and he hit his head on the wall. Ali Insanov does not admit any of these charges. The former minister does not expect justice from the court. Ali Insanov is extremely calm and optimistic. His health is also normal. We anticipated that an additional criminal case would be launched,” the lawyer noted.

Background: On August 24, former health minister Ali Insanov was charged under Articles 315.2 (use of force against a representative of authority), 234.1 (possession of drugs in an amount exceeding those for personal consumption, without the intent to sell) and 317-2.1 (preparation, storage and use of prohibited objects in prisons) of the Criminal Code in Prison #13. Ali Insanov was transferred to Baku Detention Facility #1 by the decision of Garadagh District Court on August 24 and will remain there until October 23. Ali Insanov was arrested on the eve of parliamentary elections in October 2005 on charges of preparing for a coup attempt. Later this charge was replaced by economic offences. In April 2007, the former minister was convicted of bribe taking, abuse of power and several other economic offences and was sentenced to 11 years in jail. On 14 March 2013, the European Court of Human Rights ruled that the former minister had not been tried fairly. Referring to that ruling, Plenum of Azerbaijan’s Supreme Court sent Ali Insanov’s case to the appeal court for review. In February 2014, Baku Court of Appeal upheld the 11-year prison sentence against Ali Insanov.