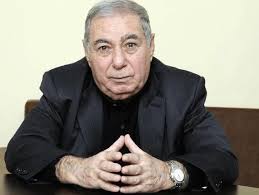 Akram Aylisli was detained together with his son Ilyas Aylisli at Heydar Aliyev International Airport on route to Italy on March 30. The Press Service of the Ministry of Internal Affairs said the writer was detained for starting an argument with border officers while passing through the border checkpoint. Aylisli was eventually freed in the evening hours on March 30.

On March 31, 2016, a criminal case was launched against writer Akram Aylisli under Article 221.1 (hooliganism) of the Criminal Code, the writer’s son Najaf Naibov said and added that his father is charged with committing violence against a border officer.

Akram Aylisli was harassed and threatened with death due to his novel titled “Stone Dreams” written in 2013. The novel deals with the violence committed by ethnic Azerbaijanis against Armenians at the beginning of the armed conflict between Armenians and Azerbaijanis in 1920s, near the end of the Soviet era. In Akram Aylisli’s own words, the purpose of this novel was to call for friendship between Armenians and Azerbaijanis. The novel was published in the December 2012 edition of Russian literary magazine Druzhba Narodov (Friendship of Peoples). The novel evoked strong reactions in Azerbaijan and the writer received different threats due to the novel. The rhetoric of hatred and threats against Aylisli started in late January 2013, and culminated in pro-government Modern Musavat (Equality) Party chairman Hafiz Hajiyev’s statement of February 11. Hajiyev publicly offered a 10,000 AZN bounty for anyone who could cut off and bring Aylisli’s ear. Yeni Azerbaijan Party’s representatives called for stripping Akram Aylisli of his citizenship. On February 7 2013, President Ilham Aliyev signed an order depriving writer Akram Aylisli of his People’s Writer title and presidential stipend. The presidential order reads that, in breach of the trust put in him in the years of independence, Aylisli distorted the truth about the history of Azerbaijan in his latest novel in a manner unbecoming of an Azerbaijani writer. Amid the public censure, Aylisli’s wife and son were dismissed from their jobs at a library and a customs office, respectively.

On April 22, 2016, the investigation division of the Air Traffic Police Department took the decision to re-qualify the criminal case against Akram Aylisli from Article 221.1 of the Criminal Code to Article 315.1 (use of violence against a government representative) and sent the case to Baku City Prosecutor’s Office for investigation. The case is currently being investigated. The brief essence of the accusation is that Akram Aylisli violated public order, uttered profanities, and hit the State Border Service officer 35-year old Nihal Seyidov in the chest on March 30, 2016. As a result of the blow, Nihal Seyidov suffered a 3.0cm*2.5cm bluish bruise to the upper right side of his chest.

Article 315 of Criminal Code, under which Akram Aylisli is charged, stipulates imprisonment for a period of up to 3 years, and does not provide for an alternative punishment such as a fine, corrective labor or community service.

Akram Aylisli does not accept the charges. He maintains that he has not used offensive words or physical force against anyone, and that his age and physical and emotional state would not allow him to commit such acts anyway. Aylisli associates the criminal case against him with his writer activities.

Authorities Punish Critical Journalist’s Brother Because of Him