GOVERNMENT TURNS A BLIND EYE TO PRESSURES ON JOURNALISTS 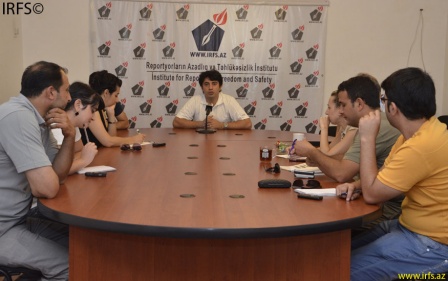 “The Azerbaijani government has offered 40,000 euros to 8 journalists who appealed to the European Court of Human Rights, but is refusing to recognize that their rights had been violated,” IRFS Director Emin Huseynov said during  a press-conference today.
The press conference focused on the European Court of Human Rights appeal by the 8 journalists against the local government. The basis for the appeal is the allaeged violation of freedom of assembly.

The government has recently stated that it is ready to reach an out of court settlement.  According to Huseynov, the ECHR ruling on this case could be the first one on freedom of assembly specifically. “This is a sham settlement, as the government does not recognise that rights were violated,that the police who physically assaulted the journalists have not been brought to justice,” said Emin Huseynov.

One of the plaintiffs, director of Turan news agency Mehman Aliyev wants the issue to be settled in court. “Money is not the issue.  The situation is getting worse in Azerbaijan.  Freedom of assembly is still being violated,” he said. Aliyev believes that citizens’ constitutional rights to hold mass meetings, pickets or to protest in any other form have virtually been abolished. Anyone attending this kind of unsanctioned meeting is likely to face pressure from the police, the courts and others.

Two of the appelants: Azadlig newspaper editor-in-chief Ganimat Zahidov and independent commentator  Shahvalad Chobanoglu agree with Aliyev:  “If just one of the plaintiffs does not reach agreement with the government, the court will consider the appeal, which will very likely be granted,” Aliyev said.

The other 5 plaintiffs- Yeni Musavat newspaper editor-in-chief  Rauf Arifogu and four employees of the same newspaper: Azer Aykhan, Etibar Seyidaga, Elshad Mammadli and Zabil Mugabiloglu did not attend the event.

Citing Article 11 of the European Convention on Human Rights, the journalists are demanding 5,000 euros each in compensation for psychological damage.