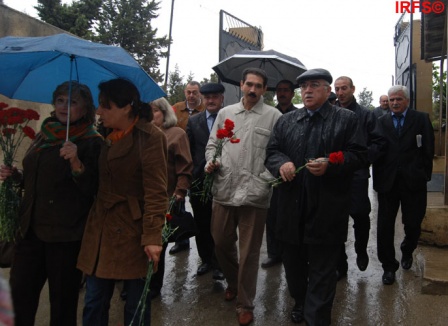 Today, after the conduction of a roundtable discussion dedicated to World Press Freedom Day, human rights activists, journalists, politicians and representatives of civil society visited the graves of founding chief editor of “Azadlig” Newspaper Najaf Najafov and slain “Monitor” Journal Editor-in-Chief Elmar Huseynov.
Here, “Turan” News Agency Mehman Aliyev, human rights activist Arzu Abdullayeva, Musavat Party head Isa Gamber and others spoke. These people spoke about the current situation, and noted the fact that people were present at the graves despite the cold, rainy weather, proves that there are people struggling to protect freedom of expression.

Then “Dalga” Youth Movement members put on a small show. The show consisted of a parody of the Presidential Administration Socio-Political Department head Ali Hasanov. The person imitating Hasanov said, “We express gratitude to Mr. Ilham Aliyev, because he care for the press, continuing the way of National Leader Heydar Aliyev. After the state’s oil policy, the next area that gets the most attention is the deliberate policy against journalists. And the result of this is that our journalists get prizes from international organizations.”

Photos from this can be viewed at http://www.irfs.az/component/option,com_datsogallery/Itemid,30/func,viewcategory/catid,45/