HEARING CONDUCTED ON BAKHTIYAR SADIGOV’S LAWSUIT AGAINST AZTV AND POLICE 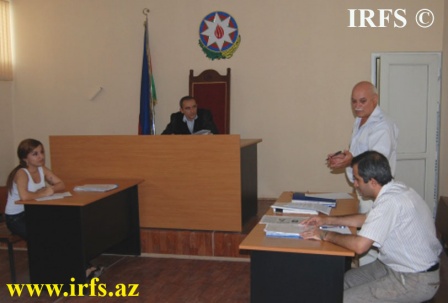 Today, August 27, in the Yasamal District Court, under the chairmanship of Judge Elchin Gurbanov, a hearing was conducted on the lawsuit that parliamentarian Bakhtiyar Sadigov has filed against the Baku City Police Department, Baku City Road Police and Azerbaijan State Tele-radio Company (AZTV).
Altay Muradov participated in today’s hearing on behalf of the plaintiff, while the defense was represented by Faig Aliyev and Adalet Sadigov. No one was present on behalf of AZTV.
The next hearing on this case will take place on 10 September at 10 a.m.
Recall that AZTV regularly shows video clips of people violating traffic rules. In one of these clips Bakhtiyar Sadigov’s vehicle was shown, and he has therefore appealed to the court, claiming that this in insult to his honor and dignity.
Previous Post

HEARING ON PARLIAMENTARIAN’S LAWSUIT AGAINST AZTV TO BE CONDUCTED TOMORROW