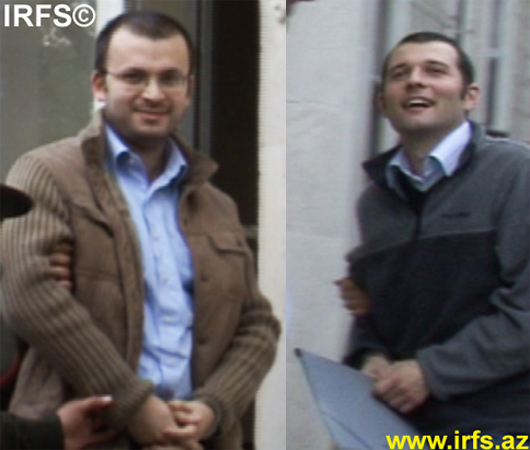 Stating that there is no evidence that Emin Milli and Adnan Hajizade will deviate from the court investigation or will intervene in the investigation, the bloggers’ lawyers Isakhan Ashurov and Elton Guliyev filed a motion to change the pre-trial decision against them. After returning from the deliberation, the judge issued a decision not to fulfill the motion.
Then Majid Mammadov, who was invited to the hearing as a medical expert, gave a witness account. The expert avoided many questions from the defendants’ lawyers, and said that the investigator gave him a decision regarding the beating of two people by six or seven people and he conducted the expertise on the basis of this decision. The lawyers considered this opinion by the expert as a distortion of expert opinion.
Although several witnesses were scheduled to be interrogated, the judge secured the interrogation of only one of them – Rashadat Akhundov. R.Akhundov confirmed that A.hajizade and E.Milli went to the Police Department #39 from the restaurant on the day when the incident happened, and that they received assistance. He stated that A.Hajizade told him in the yard of the Police Department #39 that they left Emin Milli’s shoes and glasses and Adnan’s hand bag in the restaurant. Adnan asked him to bring those things. At the restaurant, R.Akhundov was told by the restaurant’s administrator the bloggers owe 11 AZN to the restaurant for breaking dishes in addition to their charges for meal. Akhundov told them that the other two people who fought with the bloggers broke the dishes. Agreeing to this, R.Alizade took the payment for the meal and said that they will ask the other people that broke the dishes to pay 11 AZN.
The judge scheduled the next hearing on this case for 9 October at 3:00 p.m.
On 8 July, at approximately 8:00 p.m., Emin Milli and Adnan Hajizade were sitting at a table in “Lebonese” (Livan) restaurant along with several other young adults, when two people that looked like sportsmen came up to them, and attacked them causing physical injuries. Although they appealed to police as victims, police detained Adnan and Emin as suspected persons for 48 hours and freed the attackers. On 10 July, the Sabail District Court issued a decision under article 221.2.1 (hooliganism) of the Criminal Code to sentence Emin Milli and Adnan Hajizade to two months pre-trial detention. On July 20 the Appellate Court upheld the decision of the lower court. The investigation of the criminal case was concluded and a criminal case under articles 221.2.1 (hooliganism) and 127 (inflicting intentional minor bodily harm) was opened against E.Millli and A.Hajizade and the case was sent to court to be considered.
Photo: http://www.irfs.az/component/option,com_datsogallery/Itemid,30/func,viewcategory/catid,327/lang,az/