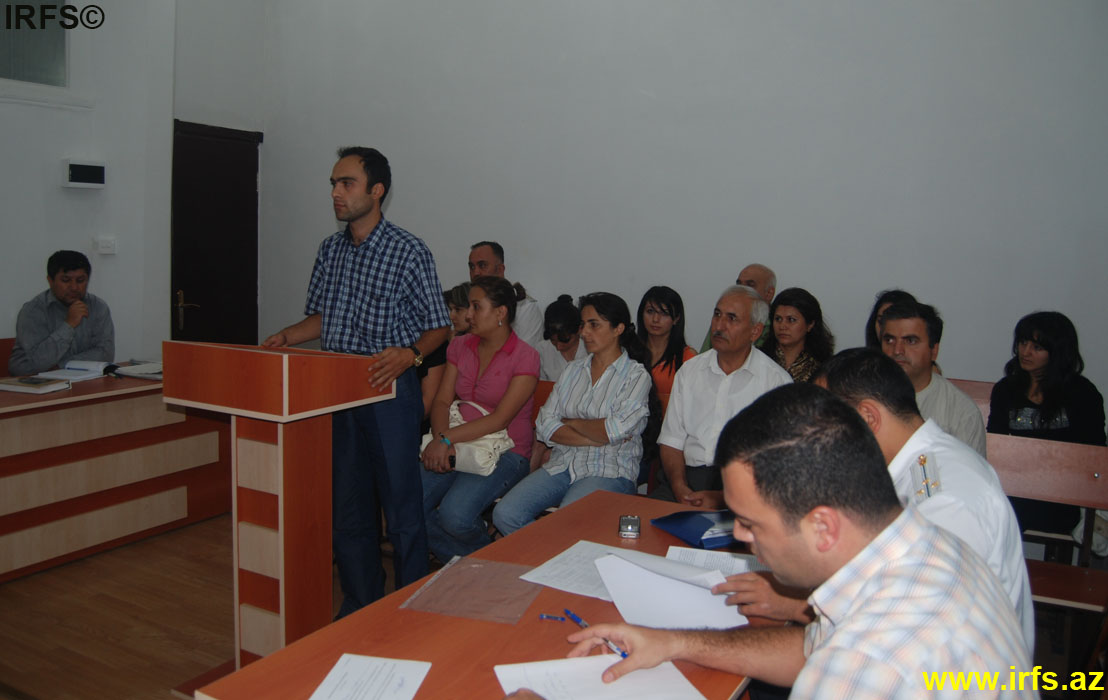 Today (23 September) in the Narimanov District Court, under the chairmanship of Judge Turgay Huseynov, a hearing was conducted on the lawsuit of Mountain Jews Community Head Semyon Ikhiilov and others against "Khural" Newspaper Editor-in-Chief Avaz Zeynalli.
Former “Khural” Newspaper employee Vugar Alakbarov was interrogated as a witness during the hearing. Alakbarov said that he witnessed the National Security Ministry (NSM) employees to confiscate 12 books during a search conducted in “Khural” Newspaper’s editorial office.

The defendant Editor-in-chief Avaz Zeynalli evaluated Mountain Jews Community Head Semyon Ikhiilov’s participation in the hearing as a principal issue and demanded that he be forcefully brought in the next hearing.  “This criminal case stems from Semyon Ikhiilov’s appeal. Therefore this person must respect Azerbaijan’s laws and law-enforcement organs, and witness in the hearing,” said Zeynalli

Following this, Judge Huseynov issued a decision to send the book "Mein Kampf" to Nasimi Linguistics Institute for an expert assessment, and postponed the hearing until the results of this assessment are received.

In December 2004, a criminal case was instituted against A.Zeynalli because of his translation of "Mein Kampf" book, and in February 2005 the case was closed because there was no evidence of a crime. Then, in May 2007, when the book was published for the second time, Deputy Head Prosecutor Rustam Usubov reinstated the criminal case. In October 2007 the investigation was concluded and the case was sent to Narimanov District Court to be considered.

The criminal case was instituted under Article 283 of the Criminal Code (inciting racial, religious, national discrimination). The lawsuit stemmed from the translation of Adolph Hitler’s book "Mein Kampf" into Azeri by A.Zeynalli and the publication of parts of the book in "Khural" Newspaper.

The hearing was postponed eleven months ago due to a motion filed by Zeynalli to send the book to the Justice Ministry for expert assessment. Zeynalli told the Institute for Reporters' Freedom and Safety that to date no assessment has been carried out.