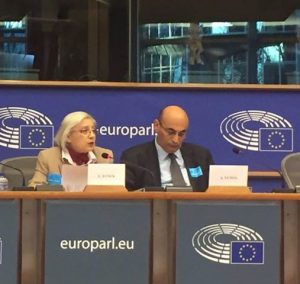 On 20 December, the Supreme Court once again postponed the hearing on the cassation appeal of Leyla and Arif Yunus, Arif Yunus’ lawyer Afgan Mammadov has reported.

“The cassation appeal has been filed against Baku Appeal Court’s judgment of 9 December 2015, which commuted Baku Grave Crimes Court’s jail sentences handed down to Arif and Leyla Yunus with suspended sentences. We are requesting acquittal of our clients,” the lawyer said.

According to the lawyer, the appeal was filed back in February of 2016, but each time when a hearing was appointed on the appeal, it was later postponed, and the hearing has thus been delayed to date. The lawyer added that the appeal has been shelved until December 27.

Background: Leyla Yunus, the director of the Institute for Peace and Democracy, and her husband Arif Yunus were arrested in the summer of 2014. On 13 August 2015, Baku Grave Crimes Court sentenced Leyla Yunus to 8.5 years and Arif Yunus to 7 years in jail. In December of 2015, Baku Court of Appeal replaced the prison sentences of the Yunus with suspended sentences. Leyla and Arif Yunus travelled to Netherlands for treatment on 19 April 2016.

Tortured Prisoner Attempts to Take His Own Life