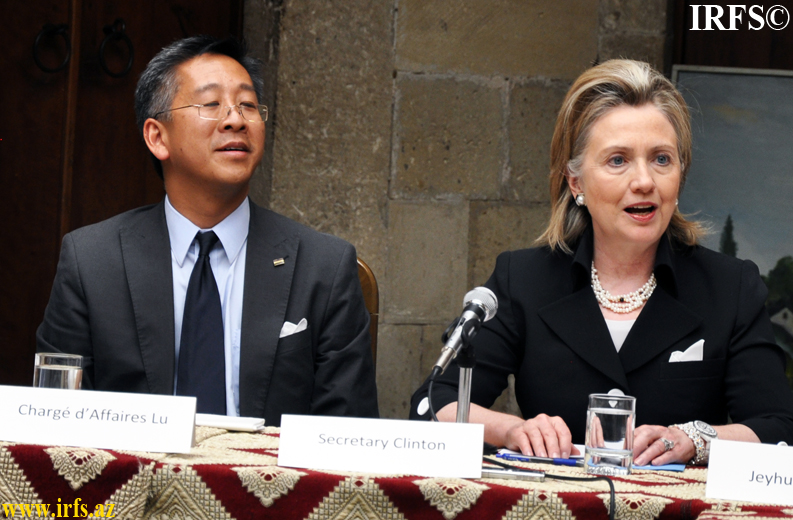 US Secretary of State Hillary Clinton discussed the issue of the imprisoned bloggers Emin Milli and Adnan Hajizade with officials during her visit to Azerbaijan. Hillary Clinton said this during a roundtable with Azerbaijani civil society and youth leaders on 4 July.

US Secretary of State Hillary Clinton said that President Obama and she have both received many letters regarding the two imprisoned young bloggers – Emin Milli and Adnan Hajizade.

“I think that, while considerable progress has been made here, you know better than I there is work to be done,” said H.Clinton addressing a gathering of youth groups and civil society representatives in Baku. “There are still lots of challenges. And, for example, President Obama and I have both received many letters about the two young bloggers who are in prison. Those are the kinds of issues that every society has to deal with, and has to try to come to grips with. And I certainly have raised those in my meetings today.”

The Institute for Reporters` Freedom and Safety appealed to Hillary Clinton regarding the situation of media and freedom of speech in Azerbaijan and asked her to discuss these issues during her visit with Azerbaijani officials.

On 8 July 2009, at approximately 8:00 p.m., Emin Milli and Adnan Hajizade were sitting at a table in “Lebonese” (Livan) restaurant along with several other young adults, when two people who looked like sportsmen came up to them, and attacked them causing physical injuries. Although they appealed to police as victims, police detained Adnan and Emin as suspected persons for 48 hours and freed the attackers. On 10 July, Sabail District Court Judge Rauf Ahmadov issued a decision under article 221.2.1 (hooliganism) of the Criminal Code to sentence Emin Milli and Adnan Hajizade to a two-month pre-trial detention. On July 20 the Appellate Court upheld the decision of the lower court. The investigation of the criminal case was concluded and a criminal case under articles 221.2.1 (hooliganism) and 127 (inflicting intentional minor bodily harm) was opened against E.Millli and A.Hajizade and the case was sent to court to be considered. According to the verdict of the Sabail district Court, Emin Milli was sentenced to 2,5 years imprisonment and Adnan Hajizade to 2 years imprisonment on 11 November. On 10 March, the Baku Appellate Court adopted a decision to uphold the verdict of the Sabail District Court. Local and international organizations recognized the youth bloggers as prisoners of conscience.