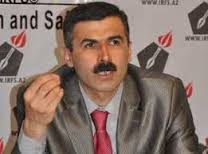 Head of “Azerbaijan Without Political Prisoners” Public Alliance, human rights defender Ogtay Gulaliyev was not issued travel documents despite the discontinuance of criminal case against him..

According to Gulaliyev, the criminal case against him was terminated on 23 October  and he applied to the ASAN Service agency for a passport on 2 November. However,his request was denied.

“I was told at the ASAN Service that, I could not be issued a passport due to ban on my exit out of the country. It is not clear why there is still a travel ban against me when the criminal case has been terminated. I should also note that I was called to the Main Organised Crime Department of the Ministry of Internal Affairs on 14 October, where I was demanded to stop defending ‘Nardaran extremists’,” the human rights defender said.

Background: Ogtay Gulaliyev was invited to Sabirabad Regional Police Department on 23 October where he was informed that criminal case against him had been discontinued.