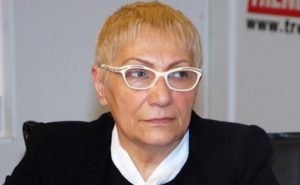 Mirvari Gahramanli, Chairwoman of the Committee for Protection of Oil Workers’ Rights, has been severely harassed on a social networking website over the past 10-12 days, the human rights defender reported on 6 January.

According to Gahramanli, the threats have multiplied since she reported on the explosion of a gas pipeline in Sangachal oil and gas terminal that occurred on 27 December 2016.

The human rights defender says there have been several provocations against her. “They demand that I keep quiet about the accidents and just praise SOCAR. I have always criticised the state authorities over the poor working conditions of oil workers. I have held public officials accountable for the accidents and losses, and have censured them for arbitrary arrests of young people,” Gahramanli noted.

Mirvari Gahramanli says she has made the threats public for precautionary purposes. She suspects that separate individuals are behind these threats rather than the government. “I will file an official complaint if the situation becomes more severe,” the rights defender said.

Note that the abovementioned gas pipeline suffered another explosion on 2 January 2017.

Background: An explosion occurred on a gas pipeline in Sangachal oil and gas terminal on 27 December 2016. Human rights defender Mirvari Gahramanli was first to report the accident. “An explosion has occurred on a gas pipeline with a barometric pressure of 125 in the compressor station of the Gas Export Department of Azerigas located in Yenikand area of Sangachal settlement. The fire has spread to residential houses. We are investigating to find out whether anyone has been injured,” she wrote.