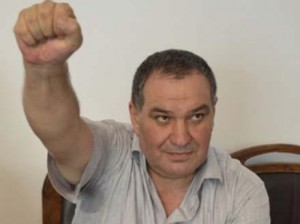 Head of the “Support to Protection of Democracy” organization, human rights defender Vidadi Isgandarli was arrested on November 30 in Goychay district. By the decision of Goychay district court he was sentenced to 15 days of administrative arrest, under article 301.1 of the Code of Administrative Offences (insubordination to police). IRFS was informed about this today, on December 3, by the brother of the human rights defender, Ogtay Isgandarli.

According to Ogtay Isgandarli, his brother considers the charge trumped-up and that he was arrested due to his social activism.

“Vidadi arrived in Goychay in the second half of November 30 and crowds met him in the city park. They talked about their problems and complained about Goychay district governor Mansur Mammadov, who is a close relative of minister of transportation Ziya Mammadov. They asked him to help their voiced be heard. The crowds got bigger as the human rights defender spoke more critically. A number of police officers surrounded the park, detained Isgandarli and took him to the police office. He was accused of not obeying the police in a drunken state, whereas he is a diabetes patient and his blood sugar level is 250.  He demanded a lawyer and agreed to undergo a test in his presence. But an “opinion” was presented to the court without the test. Although crowds of people gathered in front of the court, no one except his brother was allowed to enter the courtroom,” said Ogtay Isgandarli.

In his court address, as well as in an address that he had asked his brother to deliver to the public, Vidadi Isgandarli said that he was arrested in connection with his activism, in particular for criticizing the Goychay district governor and strong accusations disseminated via the JournalisticResearchCenter’s website.

Note that in those accusations, Vidadi Isgandarli said he became aware of his planned assassination ordered by minister Ziya Mammadov, saying that he had betrayed not only the people, but the president Ilham Aliyev as well, and he possesses undeniable evidence about this, and in case if something happens to him, he would pass that information to Ilham Aliyev and the public.

Background: Vidadi Isgandarli, an outspoken critic of the authorities, had been brought to administrative and criminal responsibility on several occasions. He was sentenced to 5-day and 15-day administrative arrests in April of 2011. In May of the same year Isgandarli was sentenced to 3 years in jail, on a charge of interfering with the election process during 2010 parliamentary elections. However, the then parliamentary candidate Isgandarli presented video evidence regarding election falsifications. Vidadi Isgandarli was recognized as “prisoner of conscience” by Amnesty International and was granted an early release in December of 2012 by a pardon decree of the president.