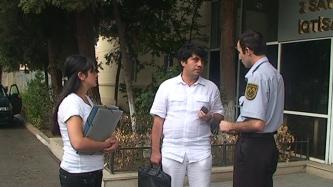 Baku Administrative –Economic Court #2 held a court proceeding on human rights defender Emin Huseynov’s lawsuit against the State Customs Committee of the Republic of Azerbaijan, the Justice Ministry, and the Finance Ministry.
He is demanding the court to rule that the actions of state authorities were illegal, to ban discrimination, and to pay for moral and material damages.
Judge Rana Huseynova presided over the hearing.
During the proceeding, the judge said that experts must go to the Heydar Aliyev Airport to review the confiscated goods.  However, the State Customs Committee, the defendant, said that they must get permission from several bodies to review the goods. In response the judge ruled to allow immediate access to the confiscated goods and bring them to the courtroom. In addition, the plaintiff, Emin Huseynov, filed a motion requesting the judge to force State Customs Committee employees to bring footage
from airport safety cameras to the proceeding. He said that the camera would have recorded the Committee employee’s rude actions against the human rights defender on February 1, 2011.  The judge granted the motion.

The next proceeding is scheduled for November 10, at 15:00

On February 1, 2011, on his way back from a business trip to
Dubai, human rights defender Emin Huseynov was detained at the customs
checkpoint in Baku International Airport for 3 hours and his mobile
phone, TV, and car light and tape, and an old camera were
confiscated.

US AMBASSADOR RESPONDS TO JOURNALISTS QUESTIONS