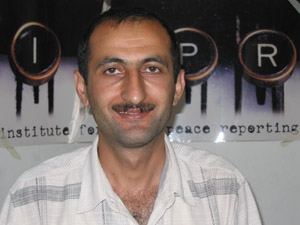 Unknown men, who had taken the photos of journalist Idrak Abbasov’s apartment a few days ago, were again seen to be filming his house on December 10th. The unwelcome visitors arrived in a Mitsubishi car with plate number 90-XG-707.
Abbasov had appealed to President Ilham Aliyev, National Security Minister Eldar Mahmudov, Prosecutor General Zakir Garalov, Interior Minister Ramil Usubov, local and foreign media workers, human rights activists, as well as foreign diplomatic missions accredited in Azerbaijan, and asked them to deal with the potential threats to his family’s and his own lives.  Seemingly the appeals had no positive effect.
“I reported the case to police for the second time. Who knows, maybe these persons plan to assassinate my family members” said the Abbasov.
Previous Post

STATE OF FREEDOM OF EXPRESSION IS DEPRESSING IN AZERBAIJAN