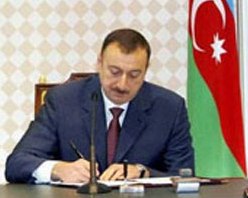 On 25 December, President Ilham Aliyev signed a decree regarding changes and amendments to several decrees related to the application of Azerbaijani Republic Law “On Amendments and Changes to Several Legislative Acts of Azerbaijan Republic” dated 30 July, 2009. According to these amendments, the administration can supervise grants and in fact can ban the NGOs from getting grants.
Especially, there is an expression like this in the ratified amendments, “Operations cannot be conducted regarding agreements on giving or receiving unregistered grants.” The Justice Ministry is in charge to oversee the execution of the agreements.
Expert on media issues, lawyer Alasgar Mammadli told IRFS that this decree creates danger for the NGOs to operate independently, and legally restricts this activity. This is the violation of freedom of association envisaged in the European Convention.

IRFS is conducting an investigation regarding this decree and will present the results of it in the near future.

APPEAL AGAINST DECISION REGARDING FAILURE TO OPEN RADIO FREQUENCY NOT FULFILLED