INTERNATIONAL CONFERENCE HELD ON REGULATION OF TV BROADCASTING IN AZERBAIJAN 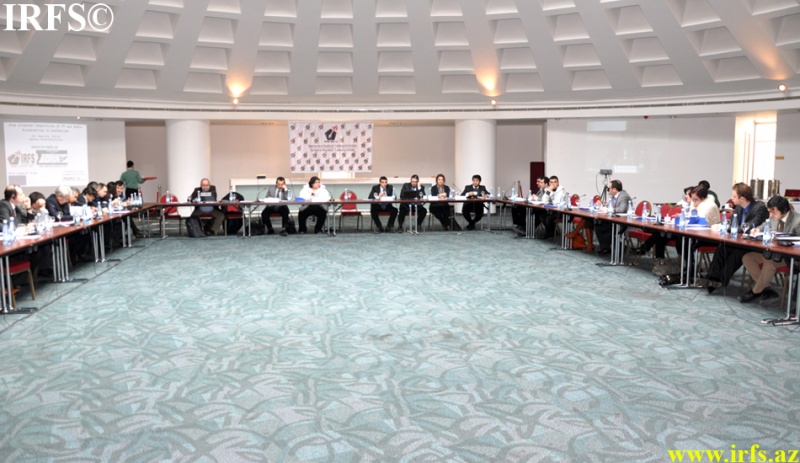 On 5 March, an international conference was conducted on the regulation of TV and Radio sector in Azerbaijan, in the framework of project “Free Airwaves”.  The conference started with opening speechs by Institute for Reporters` Freedom and Safety Chairman Emin Huseynov, Media Rights Institute (MRI) Rashid Hajili, and IREX – Azerbaijan Media Party Head Shelly Markoff.
After opening speeches, speeches and discussions on “The regulation of the TV and radio sector: the current situation and approaches” were conducted. Gulam Abdullayev, Chief advisor of the Communication and Information Technologies Ministry, participated in this panel and gave information regarding the technical situation and development perspectives of TV broadcasting in Azerbaijan.

According to Abdullayev, measures were started to upgrade Azerbaijan to digital broadcasting, and are being continued in Azerbaijan. Gulam Abdullayev responded to questions of participants, and said that the list of frequencies was given to the National Television and Radio Council. He assessed the broadcasting of TV and radio channels from foreign countries into Azerbaijan’s regions on the borderline as a problem.

Representing IREX-Azerbaijan, expert Alesger Mammadli touched upon current problems with the regulation of the TV radio sector. He recalled that Azerbaijan took several obligations to develop the broadcasting sector when it became member of certain international organizations. The expert said that not all of those obligations have been implemented and there are a number of problems in this field. According to Mammadli, not holding competitions on the frequencies, gaps in the legislation, and TV channels operating contrary to the principles considered in the current legislation are noted as the main problems.

Oleg Panfilov, a media expert from Ilya University (Tbilisi, Georgia), made a speech regarding results of investigations held on the situation of tele-journalism in the post–soviet region. Panfilov spoke about the results which show how TV channels are politicized according to their operations. The expert also said that the situation is the worst in Uzbekistan, Turkmenistan and Belarus; and regarded television channels in Azerbaijan as the most politicized.

IRFS Chairman Emin Huseynov made a speech about the opportunities of opening new television and radio channels in Azerbaijan.

According to Emin Huseynov, the changing television channels into state financed entities as a part of a closed shareholder society, and the creating of the Sport-Azerbaijan television channel operating on the basis of AZTV were illegal acts.

According to Azerbaijan’s obligations to the Council of Europe, state television channels should be turned into public broadcasters. Huseynov assessed the failure to publish the list of frequencies, and the failure to conduct contests to receive frequencies as restrictions for opening television and radio channels.

He pointed out that although a license was given only to Khazar television channel, it was able to begin to operate a radio channel as well.

The expert, who displayed results regarding media monitoring implemented in the different countries by his organization, emphasized that results of monitoring were not satisfactory in Azerbaijan. MEMO 98 organization is an international partner organization on the “Free Airwaves” project.

IRFS representative Rasul Jafarov gave a summary of the results of the monitoring that had been conducted in Azerbaijan from May until December, 2009. Jafarov said that the tendencies of the content were assessed for based on their tone.

According to Rasul Jafarov, there was no political diversity in the television channels; and priority was given to ruling political forces in the coverage of political figures. This means that principles of balance, the right to express opinions and to disseminate information comprehensively were violated. Jafarov said that there were no debates and discussion programs in the prime time period on most of television channels. He assessed that citizens were deprived of necessary information to make informed decisions.

Independent expert Mehriban Vezir, who has worked in television channels for a long time, gave information regarding a survey and pointed out that results of survey were not satisfactory.

According to the results of the survey, audiences began to watch Russian and Turkish channels that are broadcasted via satellite in Azerbaijan. Vezir said that it is necessary to take urgent measures.

Media Monitoring Institute representative Samir Ismayilov assessed the operation of radios that are operating in Azerbaijan.

Samir Ismayilov said that there were no news departments in any radios in Azerbaijan and news given at the beginning of every hour was common. He emphasized that most radios are operating on the basis of existing television channels. He assessed broadcasting of news that broadcasted on TV in the radios shortly as negative. It was pointed out negatively in the report that there was not any local radio in any region of Azerbaijan.

The third panel was dedicated to the theme of “Legislation initiatives on regulation of television and radio broadcasting: gaps and proposals in the legislation.”

Media Rights Institute Head Rashid Hajili who spoke first in this panel gave information regarding current gaps in the broadcasting legislation. Rashid Hajili assessed how the advertising market is measured officially and the lack of any measures to correct these negative tendencies. Hajili said that gaps in the legislation put open independent ownership issue, and information was not given to society transparently, such as the revenue state television receives from advertising.

Democracy and Human Rights Resource Centre Chairman Asabeli Mustafayev gave a report regarding the situation of court maintenance in the realization of broadcasting right and touched upon the existing court trial. Mustafayev gave information regarding the hearing held on the lawsuit of the Legal Enlightenment of Sumgayit Youth (LESY) Public Union against the National Television and Radio Council.

It was pointed out that the hearing was accepted for consideration in the court instances of Azerbaijan and the hearing will be brought to the European Court to issue a fair decision.

Baku OSCE Democratization Department Office Head Jacqueline Carpenter and Law and Development Public Association Hafiz Hasanov expressed their opinions regarding equal opportunity to Broadcast Media during the election period and legal issues of pre-election campaign in Azerbaijan. Carpenter gave information regarding opportunities given to candidates and parties in the television channels during election.

She pointed out that equal opportunities were not created in politics by television channels during the presidential election in 2008 or the municipal elections in 2009 in Azerbaijan.

Hasanov touched upon issues in the legislation and raised issues regarding the pre-election period, the lack of time for educational programs, and the allocation of free air time for candidates on Public TV.

Hasanov said that the President did not participate in the pre-election campaign directly during the election period. However, his visits in the regions were shown broadly in the television channels. The President made a speech and gave information regarding works to be done in the future during the visits.

IRFS chairman Emin Huseynov said in his last speech that the work realized in the framework of the project “Free Airwaves” is very important. He thanked the European Commission and German Marshal Fund for supporting the project.

*whole shorthand report of the international conference will be prepared and disseminated this week.