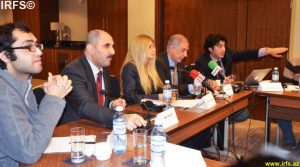 As media crackdown continues in Azerbaijan, Internet freedom groups are discussing government prospect of introducing self-regulation on the Internet.  The Expression Online coalition, and Institute for Reporters’ Freedom and Safety took the lead to organize Innovation in the field of Internet and Future Prospects conference.  The conference, that brought together some 50 representatives of civil society, academia, government and media, discussed the issues of freedom of expression online and development of e-government.

The conference is part of a larger initiative to promote Internet freedom, funded by the Canada Fund for Local Initiatives.

The event was held in Hilton Hotel on February 19.

The first session of the conference was held as a debate on current state of internet infrastructure and penetration, and was moderated by Gulnara Akhundova, program manager of International Media Support.

Emin Huseynov, chairman of the IRFS, described the situation of Internet in Azerbaijani as controversial, with more negatives than positives. Technically speaking, Azerbaijan is still lagging behind in terms of infrastructure, and from political perspective a high level self-censorship among users and attempts by the government to regulate and license online media.

According to Huseynov, positive developments in information transparency are the launch of national communications satellite and establishment of an electronic services center, ASAN.

Huseynov underlined that Internet is partially free in Azerbaijan. “Although technically internet can be deemed free, political issues concerning it must be solved immediately” said Huseynov.

Hold your horses, self regulation does not mean control

Azer Hasrat, head of the Central Asian and Southern Caucasian Freedom of Expression Network and also a member of the newly-initiated Commission of the Press Council to regulate the Internet, tried to calm down passions over the possible use of this initiative against the freedom of speech on the Internet.

He tried to explain this step by good intentions of self-regulation on the Internet, and promised to leave the committee if it tries to control online expression.

Social media expert Ali Novruzov questioned the credibility of the Press Council. “This organization has no authority to deal with the Internet. In developed countries, Internet self-regulation is exercised through such institutions as providers, bloggers, social, community and state,” he said.

Novruzov also drew attention to the fact that the Press Council decided to set up this commission, without discussing it with the online community. This position was supported by well-known experts in the field of freedom of information Alasgar Mammadli and Rashid Hajili. Mammadli questioned the credibility of the Press Council, and called its initiative an amateur performance. He said that there is no self-regulation on state-controlled mainstream media, but the Press Council has not noticed it for years. Hajili, in turn, said one should not expect anything good from the initiatives of the pro-government organization.

“Neither in the world nor in our country, there is no single opinion on the regulation of the Internet. Even UN Internet Governance Forums cannot find solution to such problems”, said Galib Gurbanov, the chairman of the Azerbaijan Internet Society, who believes internet is free in Azerbaijan.

E-government and e-literacy must go hand in hand

The second session of the conference moderated by IREX Chief of Party Angela Nicoara discussed current status of e-government and related problems. Nicoara stated that for transition to e-government there must be an infrastructure ensuring citizens access to internet and the public must be aware of e-government.

Social media expert Bakhtiyar Hajiyev said in the past two years some work has been done in transition to e-government, but it is not satisfactory. Hajiyev noted that majority of the e-services offered by the government are either useless or do not work.

The opinion of the blogosphere on the regulation of internet is more negative, as shown by the conference.

The practice of the implementation of the Law on Freedom of Information, adopted in 2005, testifies to the reluctance of the government to promote freedom of information and the Internet, as its an integral part. Alasgar Mammadli said that the information transparency of public resources is within 7%, and internet access in the regions of Azerbaijan is at a critical level. For example, in the Agjabedi region, only 32 of 7,000 people have access to ADSL internet. He also pointed out that the center for e-services ASAN provides 23 auxiliary services of nine government bodies, with exception of only two essential services, obtaining identity cards and passports.

Anar Huseynov, representative of the State Agency for Public Services and Social Innovations under the President of Azerbaijan, called not to make hasty conclusions about ASAN, saying that the process of improving the structure of this organization is ongoing, in particular it is planned to open its branches in the cities of Sumgait, Ganja and Shirvan by the end of this year.

Do not start a war, which you’ll lose.

Huseynov noted that civil society is ready to support the government’s initiative in the formation of free information society. At the same time, he reminded the words of Dunja Mijatovic, the OSCE Representative on Freedom of the Media, addressed to the governments that intended to control the web: “Do not start a war, which you’ll lose”.