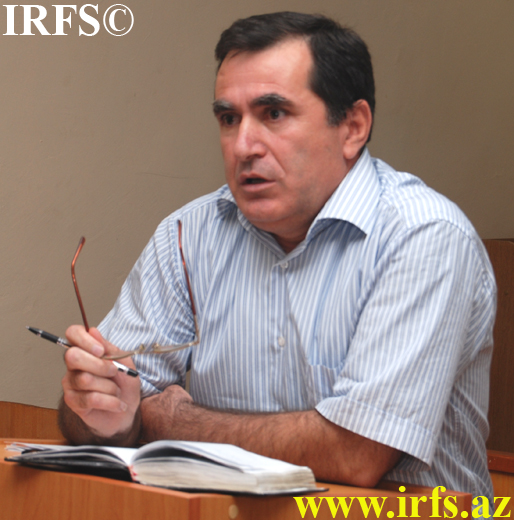 Today (30 July) in the Yasamal District Court under the chairmanship of Judge Khagani Tagiyev a hearing on “Azadlig” Newspaper journalist Agil Khalil’s lawsuit against the Chief Prosecutor’s Office, investigator Ali Guliyev and several TV channels (AZTV, Lider, Space, and ATV) took place.
Khalil’s defense lawyer Elchin Sadigov, investigator Ali Guliyev and “Lider” TV channel’s representative participated in the hearing.
The judge asked A. Guliyev to speak, noting that he was participating in the hearing for the first time. A. Guliyev touched on issues that didn’t have anything to do with the point of the hearing. He tried to prove that Agil Khalil was in fact stabbed by Sergey Strekalin. “I have been to Kurdamnir region due to the case of Agil Khalil and Sergey Strekalin and I have talked to Agil Khalil regarding this case. But I neither blackmailed him nor tortured him. What I can say about the video footage aired on TV channels is that all the testimony there are true. Using our rights, we sent these recordings to TV channels to inform the public,” he said.
At this moment lawyer Elchin Sadigov asked him, “If your goal was to inform public, why didn’t you then present witness testimonies on ‘Zeytun Baglari’ (Olive Gardens) to the public?”
A.Guliyev answered that they didn’t see any need to do so. Then A. Guliyev put forth a motion to introduce documents to court about if A. Khalil is a correspondent of “Azadlig” Newspaper.
The judge fulfilled the motion. The lawyer Elchin Sadigov stated that there is no problem with that. “I can present a court decision where it is asked for “Azadlig” Newspaper Editor-in-Chief Ganimat Zahid and the newspaper’s correspondent Agil Khalil to publish a refutation. This proves that Agil Khalil is the newspaper’s correspondent,” he said.
Then defense lawyer E. Sadigov spoke. He said that an information inquiry was sent to TV channels to get the video footages. “Although we have sent the inquiry to all four channels about obtaining the video recordings, only “Lider” TV channel replied and that was simply to refuse. None of the three other channels answered to the information inquiry.  We ourselves obtained the video-recordings which were aired on AZTV and “Space” TV. I petition the court to send an information inquiry to “Lider” TV and ATV to obtain the video-recordings that they aired.
The judge fulfilled the motion and said that an information inquiry will be sent to the TV channels. “After they are obtained, we’ll watch them during the next hearing,” emphasized the judge.
The next hearing on this case is now scheduled to take place on 7 August at 5:30.