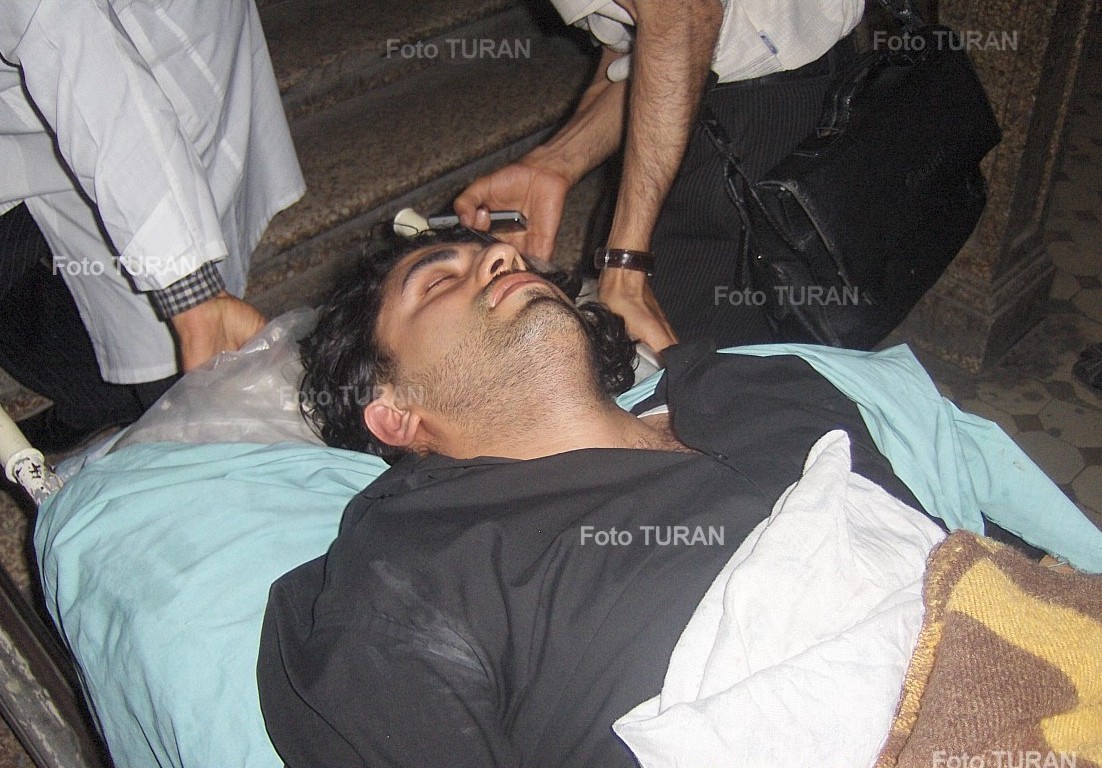 Institute for Reporters’ Freedom and Safety (IRFS) Chairman Emin Huseynov’s health has stabilized, and Huseynov is expected to be transferred from the critical care department to a regular hospital room tomorrow (17 June).

But he still suffers from pain in his head and neck, and is experiencing some dizziness and nausea. Emin Huseynov, who is receiving treatments in the Centralized Emergency Medical Assistance Hospital, told this to IRFS.

On 14 June in the “Alaturka” Cafe, an event organized by the “Che Guvera Fan Club” to mark the 80 birthday of the famous revolutionary Che Guvera and attended by a representative of the Cuban Embassy, was raided by police. Approximately 20 people were detained by police and taken to Nasimi District Police Department #22. Among those detained were IRFS Chairman Emin Huseynov and IRFS researchers Rasim Aliyev and Mirrehim Hasanov.

We note that Emin Huseynov was subjected to police pressure during his detention. Police twisted the journalist’s arms, swore, insulted and beat him. According to Emin Huseynov, the policemen struck him on the back of his neck, forced him into a car and struck him with their fists on his sides on the way to the police department.
Then in the Police Department they started photographing and fingerprinting the unlawfully detained people, including IRFS employees, without presenting any accusations against them. Huseynov expressed protest against this and he was then taken into the room of Azer Karimzade, Chief Deputy of the Police department, police major, on the order of civilian-clothed man with sunglasses who was leading the raid. According to IRFS employee Rasim Aliyev, who was also in the department, he could hear shouting, cursing and a commotion from outside the door. The civilian clothed man who didn’t introduce himself took out his gun and slammed it on the table several times, and threatening Huseynov by saying “I will destroy you.” Then the civilian-clothed man with sunglasses struck Huseynov several times with the gun, on the back of E. Huseynov’s neck.

Several minutes later Huseynov was taken out of the room and called IRFS co-founder, "Ayna" and "Zerkalo" Newspaper correspondent Iddrak Abbasov who was waiting for his co-workers to be freed. Huseynov told him that he had been subjected to physical and psychological pressure. He said his health was deteriorating and asked Abbasov to call an ambulance. He and human rights activist Arzu Abdullayev, who was also present, approached the police department and asked them to summon an ambulance; however they refused and let him free.  According to Abbasov, Huseynov was having difficulty walking and complained of pain on his neck and chest. Then he lost consciousness.

An ambulance eventually did arrive at the scene, and Huseynov was taken to the Centralized Emergency Medical Assistance Hospital. The doctors examined Huseynov and said that he sustained head and brain trauma.

According to R. Hajili, E. Huseynov was asked questions about the incident and he explained everything in detail. R. Hajili noted the initiation of an investigation on E. Huseynov’s beating positive and said that he hopes for an objective investigation.
However, Radio Liberty was told by Police Department #22 that Huseynov injured himself. In same report, doctors noted that E. Huseynov can’t accept water or food and his health remains poor.

E. Huseynov considers the statement of Police Department #22 nonsense. “I evaluate this as an attempt by police to cover up their unlawful action. Such behavior is characteristic of the police. For example, they said that ‘Gundalik Azerbaijan’ employee Uzeyir Jafarov injured himself, when he was beat in April 2007,” he said.
The Institute for Peace and Democracy has released a statement about the incident. IPD Chairman Leyla Yunus told IRFS that Nasimi District Police Department #22 Chief, colonel-lieutenant Mehdi Tarlanov and his assistant Police Major Azer Karimzade are directly responsible for the incident.

Reporters Without Borders representative Elsa Vidal also gave an interview to Radio Liberty about the incident involving Huseynov. “We want to show our support for E. Huseynov. At the same time, we want to let the government know that this kind of step a couple of months before the elections is not good,” Vidal said. She added that they have been noticing more severe pressure against journalists lately in Azerbaijan, “We call on the government to cease these methods and to treat journalists in more peaceful manner.”

“I visited E. Huseynov in the hospital on Saturday. His condition wasn’t good,” U.S. Embassy Public Affairs Officer Jonathan Henick is quoted as saying to Radio Liberty. “According to the reports we have received, nothing illegal was going on there. People were taking pictures and filming the event,” added Henick. The diplomat said that they will follow this case closely.

E. Huseynov was also beaten up 16 October 2003 during a rally conducted by opposition forces to protest the results of presidential elections in “Azadlig” square. At the time be was working at a photo correspondent for Turan News Agency. As a result of the injuries he sustained in 2003 he remains to this days a Category 2 invalid.

“AMENSTY INTERNATIONAL” PRIZE GIVEN TO JOURNALIST FROM YEMEN