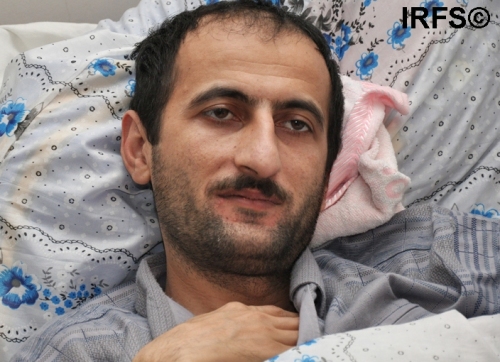 Institute for Reporters' Freedom and Safety employee Idrak Abbasov was subjected to physical and psychological pressure in the National Security Ministry of Nakhchivan Autonomous Republic.
Abbasov told the Institute for Reporters’ Freedom and Safety that on 20 February he was invited to NSM for a meeting.
“IRFS employee Rashad Aliyev and I traveled to Nakhchivan to investigate the human rights and press freedom situation. On February 18, we sent an official letter to different organizations and to Nakhchivan's NSM requesting a meeting. On 20 February at 11:45 a.m. they called to Rashad Aliyev’s phone and told us to come to the ministry at noon for the meeting. Although we were there in time, they allowed only me in,” said Abbasov.
According to Abbasov, upon entering the building of NSM his hands were restrained and he was blindfolded.  NSM employees took the journalist’s mobile phone, and photo and video cameras and then he was taken to the room of an official unknown to the journalist. "Although I told them I have heart problems and had to take medicine several times, they treated me aggressively," said Abbasov. "One person, who did not introduce himself, blamed me and IRFS in cooperating Armenia and other foreign countries, and exerted psychological pressure on me. He even threw the folder he was holding at me."
Abbasov was finally released after two hours, but only after NSM employees deleted all the photos and video footage on his cameras and ordered him go to directly to the airport and depart Nakhchivan.
IRFS employee R.Aliyev, who was also on the mission in Nakhchivan, told IRFS that he and IRFS’ Nakhchivan employees waited for Abbasov outside the NSM building. “After waiting for an hour, I appealed to NSM employees that were at the door. However, they gave no information,” said R.Aliyev. “At 1:55 p.m., I approached the NSM employees again and they said that in five minutes I would inform the mass media that Abbasov was arrested. We were told by the NSM that Abbasov was meeting with National Security Minister Vali Alasgarov.” According to Aliyev, I. Abbasov was released at 2:05 p.m.
IRFS attempted to contact Nakchivan Autonomous Republic NSM to learn their position on this incident; however the calls went unanswered.
Previous Post