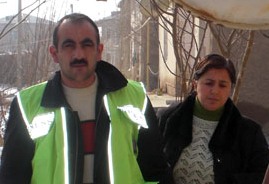 Today, 30 January, a person who introduced himself as Malik Ailyev call Radio Free Europe/Radio Libery, Turan News Agency correspondent Malahet Nasibova and threatened her and IRFS employees.
M. Nasibova reported this to the Institute for Reporters’ Freedom and Safety.
According to Nasibova, Aliyev called her twice. “First, this person called and said ‘I have no problem with you,” Nasibova said. “You are a woman and I have great respect for you. My main issue is with Hakimeldostu Mehdiyev, Elman Abbasov and IRFS Chairman Emin Huseynov.’” However, after information was placed on Radio Liberty’s website about this, Nasibova says the man called her back again. “He said, ‘I will kill you all. IRFS and ‘Yeni Musavat’ Newspaper serve Armenia,’’ according to Nasibova, adding, “In general it is not clear what this person wants. I don’t know if they taught him to say this or he is mentally ill.”
Yesterday, Malik Aliyev also called Nasibova and threatened her and employees of IRFS. On the same day, Aliyev called IRFS Nakhchivan correspondent Elman Abbasov and threatened him. The threatening calls are being made from the phone number 55-257-0807.
Previous Post