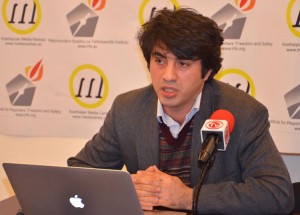 Election for the post of General Director of Public Television (ITV) was accompanied by legal violations, and therefore the results cannot be considered legitimate, said IRFS Director Emin Huseynov, one of the candidates for the vacant position, at the press conference held on April 24 at IRFS Media Center.

Huseynov noted deadline for applications was April 19. On April 21 the names of four candidates were confirmed. And the actual election was held in a very hasty manner, just one day after the candidates were announced.

Emin Huseynov proposed to postpone the election so that the members of the voting committee (ITV’s Broadcasting Council) had more time to scrutinize the candidates’ experience and skills. However the National TV and Radio Council (NTRC), which acted as the organizer of the election, rejected this offer. Huseynov warned that he would challenge the election results in court if they were not canceled.

According to Huseynov, several days before the candidate’s names were made public, some media outlets reported that Jamil Guliyev (another candidate) would be the CEO of ITV, which also questioned the objectivity of the election.

“The fact that NTRC organized and hosted the election in its office is in itself a breach of the provisions of the law on Public TV and Radio Broadcasting law” added Huseynov.

“It was not an election, but a staged show,” said Huseynov. Huseynov is particularly dismayed that the head of NTRC, Nushiravan Maharramli, grossly interfered in the election process, and played the role of “secretary of the election commission”.

In addition, three members of the Broadcasting Council were elected only on 19 April and knew very little about their functions. For instance, a new member, Zemfira Gafarova asked another member Fuad Muradov “who to vote for”, who told her to vote for Jamil Guliyev.

Moreover, Fuad Muradov has no right to be a member of the Broadcasting Board, since he is a member of the Parliament while the law prohibits MPs to be engaged in other paid activity, except for scientific, creative and educational activities.

Huseynov called the principles of voting absurd, as each member of the Broadcasting Board could vote for two candidates at once.

An indication of bias against Huseynov as a candidate was the fact that a member of the Broadcasting Board and representative of Caucasian Muslims Office, Fuad Nurullayev, who publicly called Huseynov “non-serious”, criticizing him for smiling and touching his hair. Huseynov regarded it as discrimination against himself.

Huseynov noted that he would appeal to the court with the request to cancel the results of the election. He also intends to launch, in partnership with several other NGOs, a petition campaign to request the Parliament to distrust the Broadcasting Council.