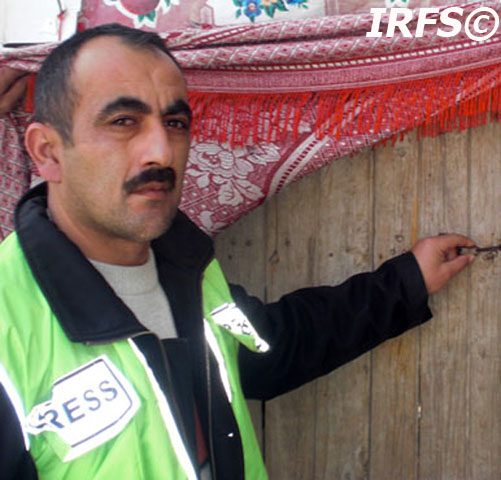 IRFS Nakhchivan Regional Correspondent Elman Abbasov has been receiving death threats to his home phone number. Unknown people have been calling his home telephone number using inappropriate language.
IRFS was told this by Elman Abbasov, “The same person speaks in a strange language – either in Persian or Kurdish language. Yesterday he was speaking in the Turkish Kurdish dialect, but today he was speaking in the Iranian Azerbaijanis’ dialect. He called me on 21 September at 4:15 p.m., on 22 September at 3:10 p.m., and on 22 September at 3:10 p.m. and threatened me and my family, and used inappropriate language.”
According to Abbasov, it is not the first case. He received such threatening calls in the past as well. Although he appealed to Law Enforcement organs regarding this problem several times, there was no outcome.
“I believe these calls are connected with my activity as a human rights  defender and a journalist,” said E.Abbasov. “In July provocation was being prepared by unknown persons against me and my relatives. I appealed to Nakhchivan Autonomous Republic, Law Enforcement Organs in the written form. I regret that my appeal has remained unanswered.”
Today, 22 September, Elman Abbasov has appealed to the Nakhchivan City Police Office regarding these issues requesting that person should be found and punished.
On 6 March 2007 IRFS Nakhchivan regional correspondent Elman Abbasov received a threatening call into his mobile phone. A person who was speaking in Russian said that he would behead him.  On 30 January 209 Sadarak region resident who introduced himself as Malik Ailyev insulted Elman Abbasov and his colleague Hakimeldostu Mehdiyev, and said that he would kill them. Official appeals were made to the Nakhchivan Internal Affairs Ministry, Prosecutor’s Office and the National Security Ministry regarding both issues, but nothing was done.
Previous Post

Effort to picket in front of the Foreign Ministry