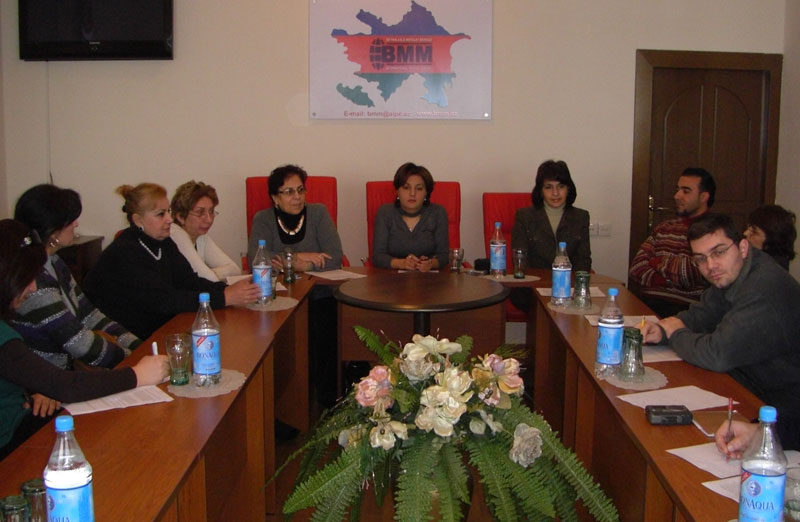 Today, 6 March, the Institute for Reporters' Freedom and Safety, the first results of IRFS’s monitoring of mass media coverage of the upcoming referendum was presented. The project is implemented with support from the UK Embassy Azerbaijan.
It was noted during the event that the monitoring is being conducted on eight TV channels (“AzTv”, “ANS”, “ATV”, “Xazar” TV, “Space”, “Public TV”, “Lider”, “Idman-Azerbayjan”) and seven newspapers (“Yeni Musavat”, “Azadlig”, “Khalg”, “Zerkalo”, “Respublika”, “Azerbaijan ”, “Yeni Azerbaijan”).
The project's findings are determined through a well-defined and rigorous methodology and are not intended to support any one view regarding the referendum, but the integrity of the media environment as a whole during the campaign period.
Since 18 February, IRFS has been monitoring eight TV channels1 and seven newspapers2. The monitoring team has been analyzing TV programming and daily newspapers, and assessing findings on the time or space allocated for referendum issues and registered initiative groups.3 In addition, because one of the recommendations put forth in the referendum is related to eliminating term limits for the president, we have also included incumbent President Ilham Aliyev as a subject in the monitoring. The tone of the coverage is also being evaluated. Quantitative analysis measures the total amount of time devoted to monitored subjects on all programming between 5 p.m. and midnight. Qualitative analysis evaluates the tone in which the monitored subjects have been portrayed – positive, neutral or negative.
It should be noted, that in accordance with changes and amendments to the Election Code made last year in June, free airtime and propaganda for candidates in elections and initiative groups in referendums has been banned from the State TV channel AZTV, even though this channels is funded through the state budget using taxpayers money. Public TV, which is also funded by the government but receives approximately half the amount of money that AZTV receives, is therefore exclusively tasked with providing free airtime for initiative groups in referendums.

The main findings during the first reporting period are:

* None of the newspapers or TV channels involved in this monitoring presented any public service announcements about the referendum.
* No paid advertisement have been observed in any of the newspapers or TV channels involved in this monitoring, even though each initiative group has been given 23,000 AZN from the Central Election Commission for this purpose.
* Coverage of the referendum by the State TV channel AZTV, which is funded from the state budget and has the largest broadcasting area of any TV channel in the country, is very limited, and a significant amount of airtime is used to portray incumbent President Ilham Aliyev in a very positive light.
* As was the case during the 15 October Presidential Elections in Azerbaijan, the private, public and state TV channels allocate a significant of airtime for incumbent President Ilham Aliyev.
* Out of the private TV channels that are involved in this monitoring, ANS provided the most diversity in its coverage of the initiative groups.
* In comparison with TV channels, the print media reflected a more diverse array of views on the referendum.
* Besides Public TV, all TV channels have displayed a preference for preparing news and programs that feature administrative figures in the election, particularly the Central Election Commission, instead of giving time to actual initiative groups. Some channels have not even stated the names of all of the initiative groups one single time.
* In comparison with the print media, TV channels have provided less coverage of the referendum issues and the activities of initiative groups.