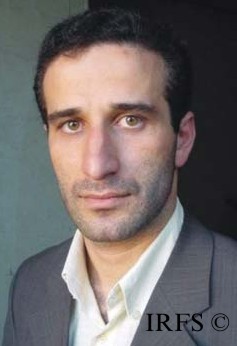 Today, 8 October, the Editor-in-chief of “Milli Yol” Newspaper and Poligon Information Agency (PIA.AZ) and his Deputy Radil Mammadov have been arrested by civil clothed persons.
The representatives of the Institute for Reporters’ Freedom and Safety Idrak Abbasov, Elnur Mammadov and Ganbar Ganbarov, who witnessed Shain Agabeyli’s arrest that was followed by rude law violations, faced harassment by police, and their video-cameras and photo-cameras were forcefully taken from them and were confiscated.
“Milli Yol” Newspaper Editor-in-chief Shahin Agabeyli called IRFS hotline at 4:00 p.m. to inform that his deputy Ravil Mammadov was arrested. According to Agabeyli, R.Mammadov’s close friend Namig Isgandarov was with him when the incident happened.
Namig Isgandarov told IRFS that at around noon they got off the bus at Buzovna circle when they were returning from Azizbayov District Military Commissariat with Ravil Mammadov. At that moment five people looking like sportsmen, who claimed to be NSM employees, but did not present any documents, said that Ravil was under search warranty and made the journalist sit in a car and took him in an unknown direction. N.Isgandarov added that those people had three cars and they video-recorded the arrest of R.Mammadov.
“I could not see the plate number of the other two cars,” said Isgandarov. “’E Class Mercedes’ in which Ravil Mammadov was taken, had its plate number on the front only. I don’t remember the beginning, but it ended with 005.” Isgandarov emphasized that they have not been able to obtain any information about R.Mammadov since then.
“Milli Yol” Newspaper Editor-in-chief Shahin Agabeyli called IRFS at 5:00 p.m. again, and said that although he called the National Security Ministry (NSM) and the Ministry of Internal Affairs (MIA) several times, his attempts to get information about Ravil Vammadov’s whereabouts did not give any results. S.Agabeyli asked to conduct an investigation regarding Ravil Mammadov’s fate. IRFS called and sent urgent information inquiries to NSM and the Ministry of Internal Affairs to receive information about Ravil Mammadov.
The Ministry of Internal Affairs Press Service employee Ehsan Zahidov told IRFS that they had no information about this incident.
NSM Public Relations Head Arif Babayev said in response to IRFS inquiry that NSM has not carried out such operation, and a person under name Ravil Mammadov was not detained by NSM employees.
At 6:05 p.m. Shahin Agabeyli told IRFS that Ravil Mammadov called his friend at 6:00 p.m. to tell that he was being held at the Internal Affairs Ministry. R.Mammadov emphasized that he was being interrogated about his article “There will be professions at the Internal Affairs Ministry” published on PIA website on 5 October.
At 7:00 p.m. S.Agabeyli said that the office of “Milli yol” newspaper and Poligon Information Agency located in Resul Rza and Bashir Safaroglu streets were encircled by civil closed people. IRFS investigation group went to PIA office immediately and witnessed that the office was in fact surrounded by the civil clothed police.
At 7:30 p.m. the civil clothed persons attacked and detained Shahin Agabeyli while IRFS employees Idrak Abbasov and Ganbar Ganbarov were recording the conversation between Agabeyli and one of the civil clothed police. Then they twisted the arms of IRFS employees and forcefully took their recording equipments. Besides, they confiscated the video-camera from Elnur Mammadov, another employee of IRFS, who was recording outside of the building, and took him away in the same car with S.Agabeyli.
At 7:45 IRFS Chairman Emin Huseynov contacted the Ministry of Internal Affairs Press Service Head Sadig Gozelov in connection with the incident and told him that a professional “Sony” video camera, a “Sony” portative video-camera and a “Nikin D90” professional photo-camera were taken from IRFS employees who were there to gather information at the site of the incident and Elnur Mammadov was taken by police. Sadig Gozelov promised that he would investigate the issue related to IRFS employees. He stated that another employee of the website Eldaniz Elgun went to the Ministry to see him and was concerned about Ravil Mammadov’s case.
Although IRFS employee Elnur Mammadov was freed on the road, the equipment was not returned. However, Sadig Gozelov refused to answer the phone calls from IRFS Chairman.
At 10:00 p.m. Shahin Agabeyli, and his deputy Ravil Mammadov and PIA.AZ website employee Eldaniz Elgun were released. They brought IRFS’s confiscated equipment with them and handed them to IRFS employees.
Tomorrow, at 1:00 p.m. a press conference will be held in the press center of IRFS regarding this incident.
Previous Post