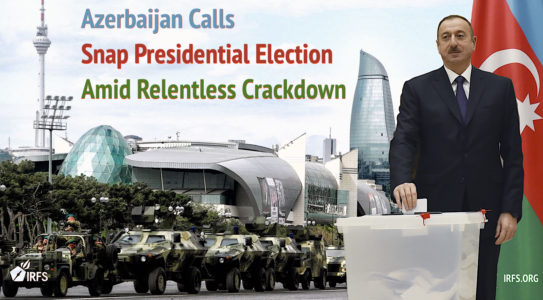 The Institute for Reporters’ Freedom and Safety (IRFS) strongly condemns the call by Azerbaijan’s President Aliyev for an early presidential election for 11 April 2018. Serious electoral flaws and ongoing human rights abuses by the Azerbaijani government undermine any meaningful prospect of free and fair elections, the organisation said.

IRFS believes that President Aliyev, who’s been in office since 2003, has intentionally abused his official powers to secure an absolute advantage for himself or his potential successor. The ruling New Azerbaijan Party earlier declared it would nominate Aliyev for the presidency again, potentially extending his rule to 2025. The election was previously scheduled for 17 October. By giving the country eight weeks warning in a threatening environment hostile to free speech and genuine political participation, President Aliyev created an uneven playing filed for candidates and made vibrant political discourse almost impossible. .

“The monitoring of pluralism in traditional broadcast media shows that all television and radio broadcasters, whether state-run or private, are invariably under the full control of the authorities and serve as a propaganda mouthpiece for the ruling regime by shaping the public opinion in favour of the government among nearly 75 percent of the total population of the country,” IRFS CEO Emin Huseynov said.

“In an environment where there is no single independent print media in the country, most of the independent news websites are subjected to judicial and extrajudicial blocking, the handful of independent online publications are under the risk of closure, and leading government critics are behind bars for exercising their fundamental right to freedom of expression, This vote would be neither free nor fair.. It would not reflect the will of the Azerbaijani people, and should be seen as undemocratic and illegitimate in the eyes of the international community.,” the head of IRFS concluded.

IRFS believes that the President of Azerbaijan has called the unjustified snap election by capitalising on an anti-democratic provision that he has introduced to the Azerbaijani Constitution through the 2016 constitutional referendum, which he himself had initiated and which was questionable in terms of democratic standards and was criticised by the Venice Commission of the Council of Europe. It was in 2016 that Ilham Aliyev managed to tailor all provisions of the Constitution to fit his personal interests through a totally rigged nationwide referendum and eliminate the already fragile balance between the branches of power in Azerbaijan.

As cautiously anticipated by the critics of the 2016 constitutional amendments, Ilham Aliyev appointed his spouse Mehriban Aliyeva to the newly established post of the first vice-president of Azerbaijan in February of 2017 and himself acquired an absolute right – unseen in any other country around the world – to call early presidential elections without providing any reasons or explanations.
Given that the 2016 constitutional changes extended the president’s term of office from 5 to 7 years and removed the minimum age limit for presidential candidates and that the two-term limit for presidency had earlier been abolished through similar dubious constitutional changes in 2009, Ilham Aliyev could become a de-facto permanent ruler similar to an absolute monarch in a de-jure unitary state with a presidential form of government.

In its review of the changes, the Council of Europe’s Venice Commission was “particularly worried” by the introduction of the figure of unelected Vice-Presidents, who may at some moment govern the country, and the President’s prerogative to declare early presidential elections at his/her convenience.

“Under the circumstances, there is no way the election can be free and fair, and no chance that a deeply flawed and rushed electoral process will help Azerbaijan either establish democracy or bring an end to grave human rights abuses by the ruling establishment. We therefore believe that the election should be postponed”, Emin Huseynov said.

IRFS calls on the Council of Europe and the OSCE, as well as the member states of these organisations, to strongly reject the call by Ilham Aliyev for snap presidential elections and
Instead call on his regime to respect the human rights of all of its citizens, and to return to democratic constitutional order.

IRFS also calls on OSCE Chairperson-in-Office, Italian Foreign Minister Angelino Alfano to urgently convene a meeting of the OSCE Permanent Council and hold political consultations on unsubstantiated extraordinary presidential elections in Azerbaijan, and to assess – on behalf of the OSCE Council of Ministers – the extent to which the decision of President Ilham Aliyev corresponds to OSCE values that are clearly and unambiguously prescribed in the Helsinki Final Act and the Paris Charter for a New Europe.

IRFS further calls upon the members of the OSCE Parliamentary Assembly to hold an extraordinary hearing on Azerbaijan at the upcoming session on 22-23 February in Vienna and adopt a resolution condemning Ilham Aliyev’s decision as a violation of the fundamental principles of human rights and democracy.

IRFS also calls on the Committee on Political Affairs, the Committee on Legal Affairs and Human Rights and the Monitoring Committee of the Parliamentary Assembly of the Council of Europe to urgently prepare an assessment report on the unwarranted snap presidential elections of Azerbaijan and other relevant reports on how these plans of the Azerbaijani authorities go against the country’s obligations to the Council of Europe regarding respect for human rights and standards of democracy.

IRFS calls on the European Union to completely reconsider its relations with the Azerbaijani authorities and suspend all negotiations as part of the preparation of the Strategic Partnership Treaty until the Azerbaijani authorities demonstrate will for genuine democratic reforms that are a priority within the framework of the Eastern Partnership program.

IRFS further calls upon the Azerbaijani civil society and political parties of Azerbaijan to challenge the presidential decree on holding early elections in the Constitutional Court of Azerbaijan.

IRFS urges the political leadership of Azerbaijan to conduct the presidential elections on 17 October 2018, as originally and repeatedly announced by the authorities themselves, and until that time to carry out necessary reform aimed at removing all restrictions on freedom of expression and freedom of association and assembly in the country. As the first and urgent steps to improve the pre-election atmosphere, IRFS calls on the authorities to release all political prisoners, including prisoners of conscience, among whom there are a number of journalists, bloggers, writers and poets, and to remove all legislative restrictions on the free functioning of civil society and political opposition.