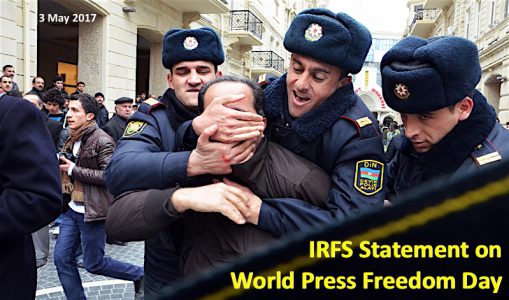 Today, on World Press Freedom Day, the Institute for Reporters’ Freedom and Safety (IRFS) honours the role of the free press and pays special tribute to those men and women in Azerbaijan who have sacrificed their lives, freedom or personal well being in pursuit of truth, humanity and justice.

“Brutal regime in Baku is determined to stifle freedom of expression of Azerbaijani citizens by closing down critical media, blocking websites, abducting, torturing, jailing, beating and even murdering journalists and media workers”, IRFS CEO Emin Huseynov said. “This regime, which denies people even basic access to information should not be given legitimacy at international fora, including first and foremost, UNESCO, a UN body tasked to promote freedom of expression, where Azerbaijan’s First Vice President enjoys a Good Will Ambassador status”, he noted.

Azerbaijani authorities have always been infamous for harassing and stifling free press. However, the level of repression has reached an unprecedented level.

Over the past eight months the government has intensified the crackdown on press freedom. IRFS’ very own Mehman Huseynov is languishing behind bars after having been abducted, tortured, and convicted of fraudulent crimes. He was illegally abducted and tortured by police and when he reported his torture the authorities proceeded to charge him with criminal defamation. After he was convicted by the courts they continued to deny every motion and appeal his lawyers submitted.

Several independent media organisations have been closed down to the point that there is not independent news physically printed in the country at all. The opposition daily, Azadliq, was the last to be forced to stop printing and since then the government has begun blocking their internet content from reaching the people of Azerbaijan. Azadliq staff are being harassed on a daily basis and their employees being interrogated. Azadliq newspaper’s distribution director Faig Amirli and reporter Seymur Hazi are currently in jail.

To go along with Azadliq’s harassment and blocking websites of critical media including Meydan TV, Radio Free Europe / Radio Liberty Azerbaijani service, and Turan news agency have also been blocked within the country and after more than a month the government is now asking for legal permission to shut down these websites. The recent constitutional amendments and restrictive laws have made it more difficult for media outlets to function. They have raised the fees for licenses and made it easier to prosecute for defamation as well as raised the penalty for defamation.

In other cases, the government has taken actions to physically endanger journalists.
Journalists and bloggers active in Azerbaijan are constantly worried about their safety and privacy. The number of journalists in prison or being detained for short stints is rising drastically.

On 28 April Mehman Galandarov, who was a cartoonist, activist, and blogger died in prison after being arrested on 7 February for baseless drug charges. The authorities claim he hanged himself but the fact that the body was not seen and that Galandarov was set to be freed after two weeks brings his death into question.

The questionable death of Galandarov makes more journalists fear for their safety in today’s Azerbaijan. Azerbaijan has a history of five journalists being murdered and brought to death because of their reporting in Azerbaijan. The authorities seem to be more willing to intimidate, arrest, and injure journalists over the past few months.

Azerbaijan’s international and trade partners have for too long prioritised commerce, energy interests and good relations over support for independent civil society and media, that continue to work against the odds in Azerbaijan.

The international community should consider legal actions against freedom of expression abusers – or next year’s World Press Freedom Day anniversary will be even less hopeful for Azerbaijani media.