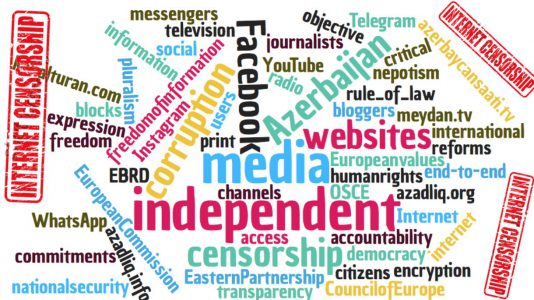 On 12 May, in an unprecedented move, a court in Baku ruled in favour of a lawsuit blocking access within Azerbaijan to the websites of Radio Free Europe/Radio Liberty’s (RFE/RL) Azerbaijani Service (azadliq.org), Meydan TV (meydan.tv), Azadliq Daily (azadliq.info), Turan TV (kanalturan.com), and Azerbaijani Hour (Azerbaycansaati.com and Azerbaycansaati.tv).

“This move is yet another devastating blow for freedom of expression in Azerbaijan. By imposing the China-like internet censorship, the authorities have left no room for doubt: Azerbaijan has blatantly flouted its international commitments, and sanctions are appropriate”, said IRFS CEO Emin Huseynov.

The court’s decision was the final repressive step of the authorities in relation to independent media whose websites have already been illegally blocked on the territory of Azerbaijan since the end of 2016.

Simultaneously with the blocking of independent mass media on the Internet, the authorities decided to partially restrict voice calls in Azerbaijan in popular messengers such as WhatsApp and Telegram using end-to-end encryption.

The media are accused of advocating the violent overthrow of the government and promoting activities of radical religious groups. “Independent media exposing nepotism and corruption in the highest echelons of Azerbaijan’s ruling establishment, and criticising the first lady’s appointment to the post of first vice president , do not pose a threat to the national security of Azerbaijan, but on the contrary advise about expediency of immediate reforms”, Huseynov said.

Completely destroying independent television and radio channels and print media, and finally deciding to obliterate the once partially free Internet, the authorities are deliberately veering sharply from the path of possible development in favour of instability and comprehensively limiting opportunities.

“Having realised that independent media outlets have not bowed to pressure, and instead are able to continue and reorganise their activities, the authorities decided to go to an unprecedented level of restriction of the right to freedom of information for the entire population of Azerbaijan”, Hyseynov said.

In Azerbaijan, those who use the Internet to express views that are critical of the authorities or to call for protest face retaliation for doing so, such as murder, torture, harassment, intimidation, and imprisonment. In 2015, IRFS former chairman Rasim Aliyev was beaten to death after he had received a series of threats in relation to his critical posts on Facebook. IRFS’ current chairman, well-known anti-corruption reporter, Mehman Huseynov has been jailed on bogus defamation charges following years of harassment culmininated with authorities torturing him in January. The fate of the blogger Mehman Galandarov, who died under unclear circumstances in the prison cell two weeks ago, has prompted condemnation from Azerbaijan’s partners, including the U.S. State Department and Council of Europe.

IRFS believes that the actions of the Azerbaijani authorities grossly violate the constitutional rights of Azerbaijani citizens and also Azerbaijan’s international obligations in the field of human rights and combating corruption.

In its 2016 resolution, the United Nations Human Rights Council (UN HRC) “condemns unequivocally measures to intentionally prevent or disrupt access to or dissemination of information online in violation of international human rights law and calls on all States to refrain from and cease such measure.”

IRFS is seriously concerned that the authorities especially on the eve of the coming elections and the expected deterioration of the economic-social situation of the population will not be limited to this one time blocking of a number of independent sites but will go to more restrictive constraints by banning in the near future such services as YouTube, Facebook, Instagram, and all social messengers using end-to-end encryption.

The intensification of repressions with the threat of the complete demolition of freedom of expression in Azerbaijan is an open disregard by the Azerbaijani regime of the common European values prescribed by the European Convention on Human Rights and also on the fundamental principles of the EU Eastern Partnership program.

In view of the open denunciation of the principles of European democracy, IRFS calls on the European Union to fully suspend the EU-Azerbaijan omprehensive Agreement” talks with the Azerbaijani authorities. On 14 November 2016, the European Council adopted a mandate for the European Commission and the High Representative for Foreign Affairs and Security Policy to negotiate, on behalf of the EU and its member states, a comprehensive agreement with the Republic of Azerbaijan.

Furthermore, in light of the Article 52 of the ECHR, IRFS urges Secretary General of the Council of Europe to closely study new glaring restrictions and attitudes towards freedom of expression and assess how much these actions are comparable to the country’s membership in the Council of Europe.

IRFS also calls on the UN and OSCE to assess the actions of the authorities and take appropriate steps within the framework of the country’s international obligations to these organisations.

IRFS also calls on the European Bank for Reconstruction and Development, the European Investment Bank and other international financial institutions, to suspend the financing of the Azerbaijan projects until the authorities show respect for the principles of transparency and accountability along with ensuring pluralism and democracy in the country.

IRFS requires the Azerbaijani authorities to ensure the right of citizens to obtain independent and objective information, to release all illegally arrested journalists and bloggers, to find and punish all those responsible for the murders of journalists and bloggers, to stop interfering with the functioning of independent media and other democratic institutions, to start real reforms to enhance the accountability of authorities and ensuring the rule of law in the country.