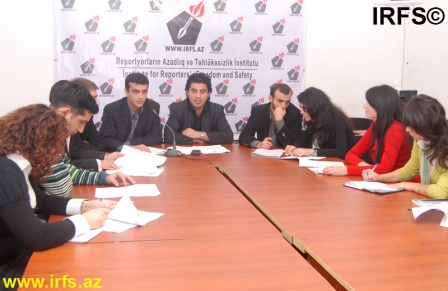 Today, 11 October, the Institute for Reporters’ Freedom and Safety unveiled its second media monitoring report of Media Coverage of the 15 October Presidential Election.
IRFS Chairman Emin Huseynov opened the event and said that the monitoring was conducted using the methodology of MEMO 98, a Slovak media monitoring organization. Huseynov noted that the second report covers 17 September through 8 October. Then the monitors spoke on the results achieved during this period.

To the question “how will you use the results of the monitoring?” from a journalist Huseynov replied, “We’ll send them to the mass media on which media monitoring has been conducted, government organizations, local and international organizations. After we released our first report, Public TV was interested in the results of the monitoring and its methodology. We responded to their appeal and told them that we’ll present the methodology and charts created using excel program to the public after 15 October when we unveil our final report. In addition, ‘Khalg’ Newspaper Editor-in-chief Hasan Hasanov was also interested in the monitoring results, in particular, how it was determined that Ilham Aliyev was covered 100%. We explained to him how we obtained these results. We are ready to give requested information to everyone who are interested,” said Huseynov
Photo http://www.irfs.az/component/option,com_datsogallery/Itemid,30/func,viewcategory/catid,144/