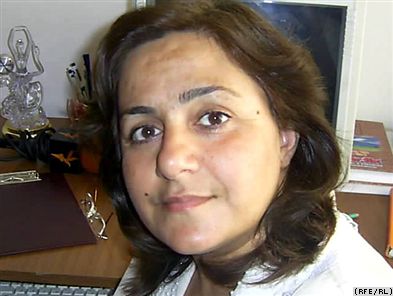 Head of the Nakhchivan Regional Resource Centre for NGO Development and Democracy Malahat Nasibova received a death threat today.
The incident happened near Nasibova’s house at approximately 3.45pm, reported her husband Ilgar Nasibov, the Radio Liberty Nakhchivan correspondent.
“Malahat was insulted and threatened by the mother of National Security Ministry (NSM) employee Rafael Asadov while leaving her house. After insulting Malahat, the woman criticized her for publishing her son’s name in the press and told her stop, or she would be killed,” Nasibov said and added that on September 2nd, when they had held a press conference at IRFS press center about the death in NSM, an unknown person visited their house asking for Malahat Nasibova and then initimidated their 16-year-old daughter before leaving.
Nasibov says that he, his wife Malahat Nasibova and journalist Elman Abbasov visited the Nakhchivan City Police office to complain about the incident. “Sahib Aliyev, the police officer who received us, vowed to investigate the complaint objectively and inform us of the results.”
Previous Post